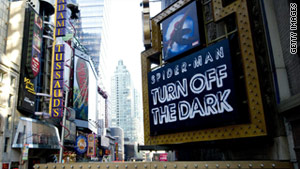 "Spider-Man: Turn Off the Dark" swings back into action Thursday after it had been plagued with technical mishaps.
STORY HIGHLIGHTS

New York (CNN) -- The Broadway musical "Spider-Man: Turn Off the Dark" returned Thursday night after a string of stunt mishaps and a serious injury to one of the actors.

"It was like nothing you've ever seen in a Broadway show before," said Rick Mars, who watched the show Thursday. "The stunts were the highlight of the show, I mean the audience would go nuts every time they'd start flying over the audience."

During Monday night's performance, 31-year-old actor Christopher Tierney fell at least 20 feet while performing a stunt. He was hospitalized and was in serious condition at a local hospital.

Jonathan Dealwis, a tourist from New Zealand who was in the audience that night, said he saw the actor fall.

"Spider-Man was on a bridge, and Mary Jane was dangling from it," Dealwis said. "I think he was meant to sort of swoop over there, but he just fell off.... The harness, you could see it just flick off his back and fly backward."

Workers for the show met with the Occupational Safety and Health Administration, and the New York State Department of Labor and devised new safety rules.

The new rules, which include providing sufficient rehearsal for understudies, were instituted before Thursday night's show.

Reeve Carney, one of the actors who play the title character, said: "I've always felt safe in the show and ... I felt even safer today considering all the measures they put in place following Monday."