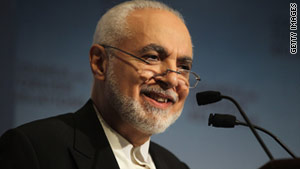 Imam Feisal Abdul Rauf is at the center of a national firestorm over a proposed New York mosque and community center.
STORY HIGHLIGHTS

(CNN) -- The imam behind the controversial Islamic community center and mosque planned near the site of the September 11 attacks in New York will begin a nationwide speaking tour next month to promote the project and encourage interfaith dialogue, a spokeswoman said Friday.

Imam Feisal Abdul Rauf has been at the center of a national firestorm over his proposal to build a high-rise community center and mosque two blocks north of ground zero, when the World Trade Center's twin towers stood before the 2001 airliner attacks.

"His speaking tour commences on January 15 in Detroit, and he will continue speaking throughout the year in about 12 different markets," Leyla Turkkan, the imam's spokeswoman, told CNN.

"This is not a fundraising tour. He is continuing his work in multifaith dialogue, and the majority of the events will be closed to the public," she said.

Imam: This is not sacred ground

Turkkan added that the events would be by invitation only, as part of security precautions.

Earlier this month, Rauf announced a multifaith movement to promote discussion among Muslims, Jews, Christians and people of all faiths. His Cordoba Movement seeks to "retake the discourse among religions and cultures from the hands of the extremists around the world who benefit from hatred and violence," he said.

Rauf has become embroiled in controversy for his efforts on behalf of Park 51, a proposed 13-story Islamic community center.

The Islamic center proposal was initiated by Sharif El-Gamal, the American-born developer and investor who heads the real estate firm Soho Properties. He and Rauf collaborated on the concept of the center. Rauf calls the project Cordoba House, while El-Gamal often refers to it as Park 51. Both names refer to the same project.

Its proximity to where the two commercial jets hijacked by Muslim extremists crashed into the twin towers prompted strong protests -- which turned the issue into a global debate over Islam's place in the United States.

The proposed center is part of a collaboration between the American Society for Muslim Advancement and the Cordoba Initiative. The complex would feature a mosque, a performing arts center, a gym, a swimming pool and other public spaces.

Some six in 10 Catholics and Mormons think another location should be found, according to a recent Gallup survey, while less than a third of Muslims, other non-Christians and non-religious Americans feel the same way. The survey found Protestants and other Christians fell in the middle.

Last month, organizers cited scheduling conflicts when they canceled a Thanksgiving prayer service at the site that was to feature a Christian minister and a rabbi.

Rauf wants his movement to create trust between faiths and counter remarks by congressmen and talk-show hosts who tie Muslim terrorism to the broader Islamic religion.