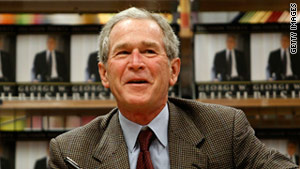 A person has been detained near the Dallas, Texas, home of former President George W. Bush.
STORY HIGHLIGHTS
RELATED TOPICS

Dallas (CNN) -- Authorities detained a person near the home of former President George W. Bush on Wednesday night after an incident in his Dallas-area neighborhood, a U.S. Secret Service spokesman said.

The person who was detained was coming to visit a neighbor of the former president, according to Ed Donovan of the Secret Service. The person was authorized to come onto the street, Donovan said.

The incident is being investigated by the Secret Service, and there was no perceived threat to the former president, according to Sgt. Warren Mitchell with the Dallas Police Department.

"President and Mrs. Bush are OK and they appreciate the work of the United States Secret Service and the Dallas Police Department in responding to the incident," said Bush spokesman David Sherzer.