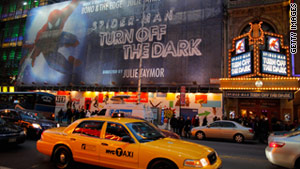 A performer in the "Spider-Man" musical was injured Monday in a fall.
STORY HIGHLIGHTS
RELATED TOPICS

New York (CNN) -- The troubled Broadway musical "Spider-Man: Turn Off the Dark" has canceled its Wednesday performance to give the company more time to rehearse new safety measures following an incident in which a performer fell at least 20 feet during a show, a spokesman said.

The show's producers acted on the guidance of the Occupational Safety and Health Administration and the New York State Department of Labor, according to spokesman Rick Miramontez.

People who bought tickets for the canceled performance from Ticketmaster are guaranteed refunds. Customers who purchased tickets through other sales outlets must contact their point of purchase, Miramontez said.

Earlier, Broadway actor Adam Pascal called for the prosecution of the show's director, Julie Taymor, because of a series of recent mishaps, including Monday's hospitalization of 31-year-old Christopher Tierney.

"They should put Julie Taymor in jail for assault!" Pascal posted on the internet site Facebook.

He called for lawsuits against Taymor and others invested in the production, such as musical stars Bono and David Howell Evans.

Pascal later recanted the comments, saying, "I think some of you missed the intended humor in my post, although my anger is real, I don't think anyone should sue Bono and the Edge you dummy! Or put Julie Taymor in jail you double dummy. I was making a point."

The show, with music and lyrics by U2's Bono and Howell (aka The Edge), is the most expensive in Broadway history, but production has been beset by cast injuries and technical problems.

Taymor said the accident was "obviously heartbreaking for our entire team and, of course, to me personally."

"I am so thankful that Chris is going to be all right and is in great spirits," Taymor said in a statement released Tuesday. "Nothing is more important than the safety of our Spider-Man family and we'll continue to do everything in our power to protect the cast and crew."

Tierney was initially listed in serious condition at Bellevue Hospital.

The fall that injured him was caused by human error, the Actors Equity Association, a performers' union, said Wednesday.

On Tuesday, the "Spider-Man" company met with officials from the union, as well as representatives of the Occupational Safety and Health Administration and the New York State Department of Labor.

The union did not give details on the error, but the group said it worked with the other agencies to develop a safety plan to address the issue.

A producer then came out and said the show was over. Dealwis said the performer was wheeled away in a neck brace and was alert when he was taken to Bellevue Hospital.

Initially, only the Wednesday matinee performance was postponed after the incident, and performances were to resume Wednesday evening.