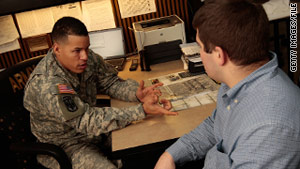 (CNN) -- Nearly a quarter of all students who try to join the U.S. Army can't pass the entrance exam, a new study says.

The study, "Shut Out of the Military: Today's High School Education Doesn't Mean You're Ready for Today's Army," puts the blame on America's educational system.

"This is true for men and women of all races and ethnicities, but especially for young people of color," according to the study released Tuesday by the Education Trust. "That's because they don't have the reading, mathematics, science and problem-solving abilities that it takes to pass the enlistment exam, which is designed specifically to identify the skills and knowledge needed to be a good soldier."

"Among white test-takers, 16% scored below the minimum score required by the Army. For Hispanic candidates, the rate of ineligibility was 29%. And for African-American youth, it was 39%," the study says.

Recruits must score at least a 31 on the test to meet minimum eligibility requirements. Higher scores can qualify recruits for enlistment bonuses and advanced training.

"In every state in America, the military turns away remarkably high percentages of applicants who, despite their high school diplomas, lack the reading, math, science and problem-solving skills needed to serve in the armed forces," the study says.

The United States regularly scores in the middle of the pack in educational achievement.

The results of a global education survey this month showed U.S. high school students come in 26th out of 65 in combined scores for math, science and reading tests, according to the Organization for European Economic Cooperation's Program for International Assessment.

Eight out of the top 10 entries are from the Asia-Pacific region, including the Chinese cities of Shanghai and Hong Kong as well as Singapore, South Korea and Japan.

The Education Trust said the results of the Army's Armed Services Vocational Aptitude Battery test are indicative how America's education system prepares students for the civilian workplace as well.

"Because the (Army test) specifically assesses readiness in a wide range of vocational pathways, it's equally likely that the men and women who don't pass the test are unprepared for the civilian workforce."