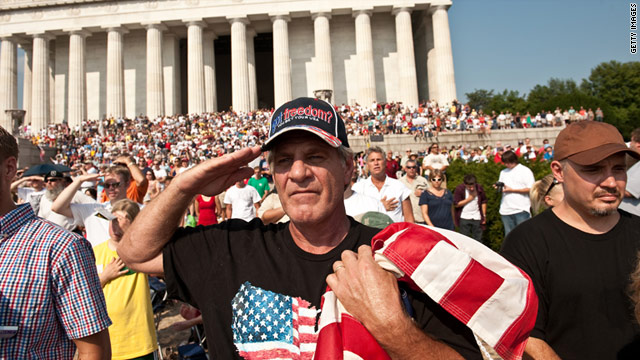 White marchers gather at Glenn Beck rally this summer. Were they driven by racial fears or patriotic sentiment?
STORY HIGHLIGHTS

(CNN) -- They marched on Washington to reclaim civil rights.

They complained of voter intimidation at the polls.

They called for ethnic studies programs to promote racial pride.

They are, some say, the new face of racial oppression in this nation -- and their faces are white.

"We went from being a privileged group to all of a sudden becoming whites, the new victims,'' says Charles Gallagher, a sociologist at La Salle University in Pennsylvania who researches white racial attitudes and was baffled to find that whites see themselves as a minority.

"You have this perception out there that whites are no longer in control or the majority. Whites are the new minority group."

Call it racial jujitsu: A growing number of white Americans are acting like a racially oppressed majority. They are adopting the language and protest tactics of an embattled minority group, scholars and commentators say.

They point to these signs of racial anxiety:

• A recent Public Religion Research Institute poll found 44% of Americans surveyed identify discrimination against whites as being just as big as bigotry aimed at blacks and other minorities. The poll found 61% of those identifying with the Tea Party held that view, as did 56% of Republicans and 57% of white evangelicals.

• More colleges are offering courses in "Whiteness Studies" as white Americans cope with becoming what one commentator calls a "dispossessed majority group."

• U.S. Census Bureau projections that whites will become a minority by 2050 are fueling fears that whiteness no longer represents the norm. This fear has been compounded by the recent recession, which hit whites hard.

You have this perception out there that whites are no longer in control or the majority.
--Charles Gallagher, sociologist

• Conservative talk-show host Rush Limbaugh argued in a radio show that Republicans are an "oppressed minority" in need of a "civil rights movement" because its members willingly sit in the "back of the bus" and "are afraid of the fire hoses and the dogs."

• Fox talk-show host Glenn Beck led a march on Washington (attended primarily by white people) to "restore honor," and once called President Obama a racist with a "deep-seated hatred for white people and white culture." He later said he regretted making that comment.

• Conservative news outlets ran a number of stories last summer highlighting an incident from the 2008 elections, in which activists from the New Black Panther Party appeared to be intimidating voters at a polling place. Those claims were never proven.

Mass rallies in Washington, voter intimidation at the polls, creating ethnic studies programs at colleges to promote racial self-awareness -- it sounds like a script from a civil rights documentary.

But not everyone buys that script. Mona Charen, a conservative columnist for the National Review, challenges that view with this question: If more white Americans feel like an embattled minority, why did they elect President Barack Obama?

"Did they become racist after electing the first black president?" she asks.

Sure, she says, there are individuals who nurture racial animosity, but most Americans deserve praise for looking past race.

The proof, she says, isn't just in the fact that the nation elected its first black president. She cites the rise of more interracial couples.

"When I grew up, it was incredibly rare to see interracial couples," she says. "People would turn their heads on the streets. Now it's so common that no one notices it anymore."

When white is no longer the norm 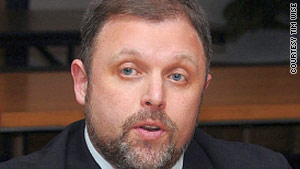 The notion that many white Americans feel anxious about their race is not new. Today, however, economic anxieties are feeding those racial fears, says Tim Wise, author of "White Like Me."

Many white Americans have lived under the assumption that if they worked hard, they would be rewarded. Now more white Americans are sharing unemployment lines with "those people" -- black and brown, Wise says.

"For the first time since the Great Depression, white Americans have been confronted with a level of economic insecurity that we're not used to," he says. "It's not so new for black and brown folks, but for white folks, this is something we haven't seen since the Depression."

Economic insecurity is what Colby Bohannan says convinced him to form the "Former Majority Association for Equality." The association is awarding $500 scholarships to five deserving white men because they aren't eligible for scholarships reserved for women and minorities, he says.

"Living in America, you hear about this minority or that minority, but it's never been used in the same sense for Caucasian Americans," Bohannan says. "There was no one for white males until we came around."

Bohannan says the formation of his group was not motivated by racism, nor will it accept donations from hate groups.

"We're not trying to promote racial bigotry," Bohannan says. "All we're about is helping college students trying to better their lives who happen to be white males."

Some white Americans not only feel ignored in higher education; they feel excluded by popular culture.

The face of America is changing, says Wise, author of "White Like Me." American culture has become so multicultural that many of the nation's icons -- including celebrities, sports heroes, and other leaders -- are people of color.

This racial unease is more pronounced among older white Americans, who grew up in an era where America's icons were virtually all white, Wise says.

"The idea that we're losing our country is something that's not going to have a lot of resonance for someone under 30," Wise says. "These are white folks who don't remember the country that their parents are talking about."

With white no longer the norm, more white Americans are hitting the books to ask a question that few felt a need to ask before: What does it mean to be white?

"Whiteness Studies" began popping up in a few isolated academic institutions in the 1990s. Now such programs can be found in places such as the University of Wisconsin and the University of Utah. These courses examine what whiteness has meant during different periods of American history.

For many decades, white people saw themselves as individuals, not as members of a race, says Matt Wray, a sociologist at Temple University in Pennsylvania, who writes books about white studies.

"We are often offended if someone calls attention to our race as shaping how we view the world," says Wray, author of "Not Quite White." "We don't like to be pigeon-holed that way. Non-white Americans are seldom afforded this luxury of seeing themselves as individuals, disconnected from any race."

Still, Wray says anxiety among whites over their place in America is nothing new. Some 19th century whites worried about slave revolts. During segregation. some worried about blacks they labeled as "uppity Negroes."

"Whites have never really felt terribly secure in their majority status," he says. "It's often said that it is lonely at the top, but it's also an anxious place to be, because you live in constant fear of falling."

'Diversity is not strength'

Some white commentators are unapologetic about this racial anxiety.

Peter Brimelow, author of "Alien Nation: Common Sense About America's Immigration Disaster," asserts that much of white America's anxiety derives from living under a black president and changing demographics.

Diversity, he says, "is not strength."

Brimelow's website, VDARE.COM, has been described as a hate site by the Southern Poverty Law Center, a group that tracks extremist groups in the U.S.

Some may see him as extreme, but Brimelow argues in his columns that more white Americans are moving toward his stance on immigration and other issues.

He cites as proof the rise of the Tea Party movement and the racial makeup of Beck's march on Washington. He says more whites recognize, even if it's only on a subliminal level, that they have common interests to defend.

"Of course, they would deny this, quite sincerely, if you put it to them because the idea of whites defending their interests as whites is quite new," he says. "Americans are trained to think that any explicit defense of white interests is 'racist.' " 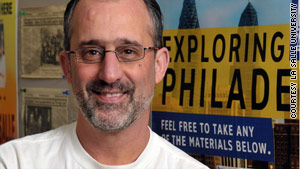 Sociologist Charles Gallagher says more whites regard themselves as an embattled minority group.

James Edwards, host of the "Political Cesspool" radio show, isn't shy about naming those interests. He says white Americans have become the "dispossessed majority" and that coming demographic changes may turn the United States into a "Third-World flop-house."

Edwards, who is considered a white nationalist by the Southern Poverty Law Center, says whites must organize like other stigmatized groups.

Those white interests have been compromised by what he sees as the "preferential treatment" blacks have received in the job market to compensate for slavery, Edwards says.

"Whatever mistakes might have been made in our pasts, they have not only been corrected, but they've been overcompensated for," he says.

"They're the victims of it every day. Anything a white conservative does that a liberal doesn't like is called racism."

Both Brimelow and Edwards reject outright the Southern Poverty Law Center's description of their organizations as extremist.

'It's not a race issue, it's a principle'

Ginger Howard is a white Southerner who doesn't feel dispossessed. She attended Beck's rally last summer and described it as a religious event, not a political one.

"It was such an amazing event to be with such like-minded people," she says.

Beck says he held the rally to reclaim the civil rights movement "from politics." He held the rally on the anniversary of the 1963 March on Washington, where the Rev. Martin Luther King Jr. delivered his "I Have Dream Speech."

Howard says she attended because she wanted to raise money for U.S. troops and protest against government dependency.

"It's not a race issue, it's a principle issue," says Howard, owner of the Ginger Howard Selections clothing store in Atlanta, Georgia.

Plante, who says he grew up in a Chicago home with a picture of Martin Luther King Jr. on the wall, attended both Beck's rally and a follow-up rally by Jon Stewart, host of the Daily Show.

Stewart and fellow Comedy Central host Stephen Colbert held their "March to Keep Fear Alive" on the National Mall two months after Beck's rally. Stewart said he held the rally for people tired of the media portraying America as a divided country.

"The Beck crowd was no more white than the Jon Stewart rally, but nobody in the news media described the Stewart crowd as overwhelmingly white," Plante says.

One prominent observer of American culture suggests all Americans -- white, black and every other minority -- should be concerned about the future.

In his 2007 book, "E Pluribus Unum: Diversity and Community in the Twenty-first Century," Putnam says his studies of diverse communities show that in the short run, its members tend to expect the worst, distrust neighbors and withdraw.

"Residents of all races tend to 'hunker down,' '' Putnam writes. "Trust (even of one's own race) is lower, altruism and community cooperation rarer, friends fewer."

Is this America's future?

It doesn't have to be, says Gallagher, the La Salle University sociologist.

Gallagher points out that the United States has accommodated massive change before. Women were once thought too emotional to vote, interracial couples were outlawed, blacks enslaved.

He says his children won't see race the same way that he or other generations did. They won't see diversity as a weakness.

It'll just be a way of life.

"Like it or not, the country is going to look more like it should -- more brown folks, more yellow folks, more gay folks, more mixed folks," he says.

It's easy to be pessimistic, he says, but his profession teaches him to look past the headlines.

"When you take the long view of human history, change is slow, but change happens."