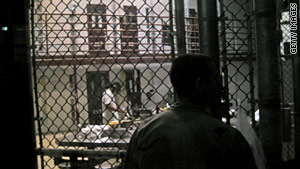 Washington (CNN) -- The Obama administration is drafting new plans to hold suspected terrorists without trial indefinitely but allow them to challenge their imprisonment periodically, a White House official said Tuesday.

A proposed executive order would cover prisoners who can't be tried in civilian courts or before the military commissions set up at Guantanamo Bay, Cuba, said the official, who spoke on condition of anonymity.

The official provided few details, since the draft had not yet been presented to President Barack Obama. But the official said Obama had pledged in May 2009 to give suspected terrorists some recourse.

"We must have clear, defensible and lawful standards for those who fall in this category," Obama said in a 2009 speech at the National Archives. "We must have fair procedures so that we don't make mistakes. We must have a thorough process of periodic review, so that any prolonged detention is carefully evaluated and justified."

The Supreme Court ruled in 2008 that captives held at the U.S. prison camp at Guantanamo Bay could challenge their detention. But the decision gave no specific guidelines on how often accused terrorists could make their claims.

The latest proposal could be aimed at securing political support for the Obama administration as it ponders whether to bring top al Qaeda figures such as Khalid Sheikh Mohammed, the accused architect of the September 11, 2001, attacks on New York and Washington, to the United States for trial in a civilian court.