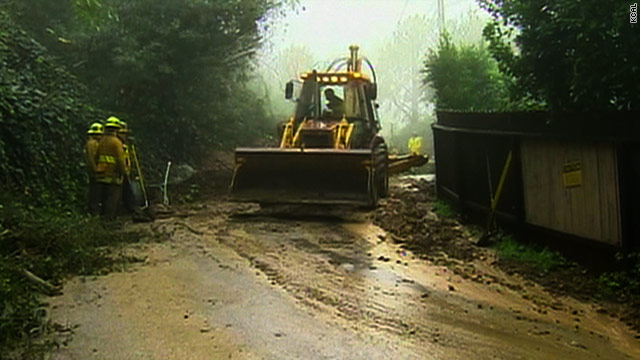 Los Angeles (CNN) -- Heavy rains prompted the emergency evacuation Monday of nearly 2,000 residents of a flooding Southern California town and the temporary closure of at least two highways because of mudslides.

Meanwhile, as much as 10 feet of additional snow is on tap for the Sierra Nevada, doubling the amount that's fallen in an epic storm on the cusp of the winter solstice.

Residents near McFarland were evacuated Monday because of what Fire Department spokesman Sean Collins called "major flooding." The evacuation order was later lifted after officials cleared debris from a creek, allowing the flow of water to resume.

The area has been inundated with rain for four days, with totals ranging as high as 10 inches. The National Weather Service said additional rain is expected in the area through Tuesday.

A mudslide closed a portion of State Route 41 in San Luis Obispo County. A stretch of State Route 34 in the Oxnard area was closed because of flooding.

It was unclear when the roads would reopen.

The rain was expected to diminish Monday but intensify once again Tuesday night and Wednesday, according to the National Weather Service. Yet another storm is forecast for Christmas night.

The precipitation is part of a massive, moisture-laden West Coast system that will continue to bring more rain and snow to the area through much of the week.

A winter storm warning remained in effect through Monday afternoon for California's Sierra Nevada, from Yosemite to Kings Canyon, according to the National Weather Service.

"Storm totals of 5 to 10 feet above 7,000 feet are likely," the weather service said, and periods of heavy snow will continue through Monday. High winds are also forecast for the region, which received several feet of snow over the weekend.

Forecasters said travel into the high country of the southern Sierra Nevada could be difficult, if not impossible.

Mammoth Lakes, California, got almost 9 feet of snow in less than 24 hours, according to Cabrera.

On Monday, Sarah Butner of Orange County, California, was visiting family in Mammoth Lakes in the central part of the state.

"We get a lot of snow here but not usually this much in a 24-hour period," said Butner, a hairstylist who's also a CNN iReporter. "The decks have a good 5 feet of snow on them," and there's flooding at the end of the neighborhood, she said.

"We're getting a couple inches an hour as of now," she said late Monday morning.

CNN's Nick Valencia and Michael Martinez contributed to this report.