By the CNN Staff 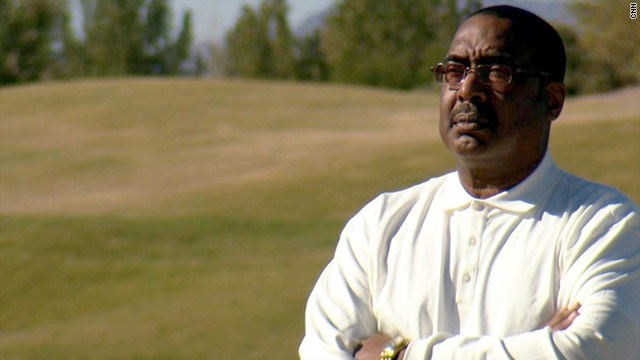 (CNN) -- The last time Earl Woods Jr. saw his half brother Tiger was four years ago, when the family buried their father.

Earl Woods Jr. and his two siblings Kevin Woods and Royce Woods, also Tiger's half siblings, joined Tiger on his private jet to take their father's remains to Kansas.

The three are the offspring of Tiger's father Earl Woods Sr. and his first wife Barbara Hart Woods. The couple divorced in 1968.

"He was gracious enough to allow us to join him on the jet to take my dad to Kansas," says Earl Woods Jr.

"I remember we came off the jet, walked down the runway, hugged, (we said) 'Hey, how you doin'?' And he went that way with the entourage, and we went this way. And that was the last I ever saw him."

That was in May 2006, at a time when Tiger was cementing his legacy as one of golf's greatest. After his father passed, Woods memorably won the British Open and dedicated the victory to his dad, who had been his first coach when he was just 3 years old.

He won one more major championship that season and seven other PGA tour events.

Tiger was one of the most popular figures in the world. But he had no contact with his half siblings -- Earl Jr., Kevin and Royce. Earl Jr. says he has reached out through phone calls and letters, but got no response.

I think that our father was a part of Tiger so much that, when he passed, Tiger became lost.
--Earl Woods Jr.
RELATED TOPICS

"I have no grudge against him. I'm disappointed. I'm a little angry," he says. "But, if he chooses to contact and to be in contact, we would love that. You know, we have unconditional love for him, whether he contacts us or not."

Earl Jr. wants Tiger to respond because Kevin is sick. He has multiple sclerosis and his health has declined 40 percent in the past two years, Earl Jr. says.

"Kevin doesn't want this to be a big to-do about his condition," Earl Jr. says. "But, you know, it makes me a little angry that ... there is this issue with trying to get the news to him. And it's been so difficult. It's like he doesn't care. I kinda feel that he does."

When Tiger, born in 1975, was just starting out as a golfer, Earl Jr., who was a tool and die maker, says he cut down some clubs and worked in the shop getting them ready for the pint-sized lad.

Even after he moved out of the family's house into his own apartment, he would come down on weekends to visit. He says his little brother was a bit of a nerd, who when he wasn't golfing was often on the computer.

"He knew a lot about those computers at a young age."

Tiger played other sports too -- soccer and cross-country -- but Tiger excelled at golf from an early age, Earl Jr. says.

He and his siblings never felt like Tiger was getting special treatment -- their father was a born instructor, Earl says, and spent a lot of time in the backyard playing baseball with he and Kevin, too.

Earl Woods Sr., a retired military officer, was a dominating presence. Many people wonder if Tiger changed greatly after his father died. Earl Jr. can't say for sure, but says their father instilled good values in his children and that Tiger is a good man who "made critical mistakes" in his marriage.

Earl Jr. says Tiger isn't a womanizer -- he had been surrounded by groupies since his days as a teen national champion and young celebrity -- so he's puzzled as to why Tiger is reported to have had so many affairs recently. He thinks hanging around with other celebrities that were living a playboy lifestyle affected Tiger.

And he thinks it would be different if Earl Sr. were still around.

"My Dad let Tiger be his own man when he was alive," Earl Jr. says. "But I think that Tiger felt an obligation to make my father proud of him and not get caught up in -- the different things that some popular people get caught up in and that he had to live his life walking down a certain path.

"But with him gone, I don't know if there's anybody in his group that holds him to task anymore."

His half-brother lost his way, he says.

"What I saw was that -- he lost a part of himself," he says. "I think that our father was a part of Tiger so much that, when he passed, Tiger became lost. That he didn't know how to fill that void."

But the Tiger talked about by media and critics isn't the real Eldrick Woods, he says. Tiger isn't arrogant, just very confident of his abilities, Earl Jr says. And he feels that as a golfer he needs to conduct himself a certain way with people. Some people misinterpret that as aloofness, his brother says.

Some may question why Earl Jr. is speaking now. He says it's not because he wants money from his famous half-sibling.

He says that after Tiger's auto accident and the subsequent scandal last November, his family wanted to give Tiger some time. But now they want a few things. They want him to know about Kevin. They want people to know the real Tiger Woods.

But most of all, they just want to know how he's doing.