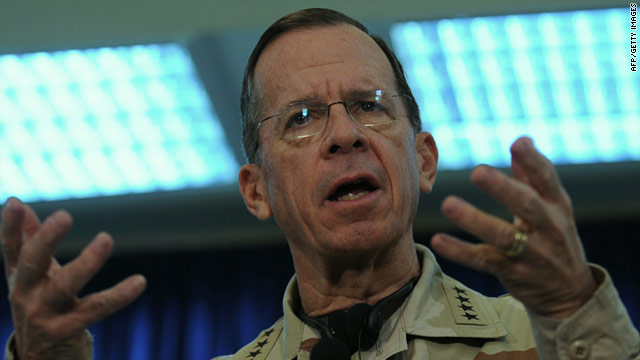 "We can take nothing for granted at this point," said Adm. Mike Mullen, chairman of the Joint Chiefs of Staff.
STORY HIGHLIGHTS

Kabul, Afghanistan (CNN) -- America's top military official said the U.S. review of strategy in Afghanistan and Pakistan "shows us that we are on the right track," but more progress needs to be made, particularly in the area of government and the rule of law.

"I remain convinced that we have the right strategy, we have the right leadership and we now have the right resources in place to disrupt, dismantle and defeat al Qaeda, to reverse the momentum of the Taliban and to prevent Afghanistan from becoming a safe haven," said Adm. Mike Mullen, chairman of the Joint Chiefs of Staff.

"We can take nothing for granted at this point. In fact, our review tells us that in order to fully cement the progress we've made, we must work harder with local government on the delivery of basic services and on accountability."

Speaking to reporters in Kabul about the review, released Thursday, Mullen cited military strides and the "tremendous focus on and desire to either capture or kill" al Qaeda leader Osama bin Laden and his No. 2 man, Ayman al-Zawahiri.

"The enemy is being pushed out of population centers, he is being denied sanctuary, he's losing leaders by the score, and his scare tactics are being rejected by local citizens," he said. "All the while, those very citizens are taking back their towns and their villages, building schools and roads, harvesting alternative crops and in general contributing to a growing sense of safety in parts of the south."

One commander, quoted by NATO's International Security Assistance Force in a press release Friday, said the combat operations are essentially over in Marja, the Helmand province region where troops embarked on an offensive against the Taliban last February.

Mullen said he isn't surprised to see progress in the Marja area but he added, "I will admit to a certain delight at seeing it take root in Kandahar, particularly in Arghandab and Zhari, where the enemy is not accustomed to losing."

Mullen said "the enemy is losing" and "I have every confidence that he will continue to lose so long as coalition and Afghan forces increase their pressure on his operations and improve their own capacity."

Mullen said building up the Afghan security forces is an important component to success.

He expressed concern that "hard-fought and hard-won" security gains "are not followed up by more important gains in governance and rule of law."

"There are still too few district administrators in places, too much Taliban in conflict resolutions, and too little real economic process. Many of our accomplishments, even the ones I saw down south, are tenuous and can be lost. Indeed, they will be lost if good governance and responsible civic responsibilities are not assumed by the Afghan government with the same alacrity and the same courage as the troops on the ground," he said.

Mullen stressed the need to continue forging a "strategic partnership" with Afghanistan, ties based on "mutual friendship" and "not on military footprint."

"Going forward, we know we need to support an Afghan political process that includes reconciliation with Taliban who break with al Qaeda, renounce violence and accept the Afghan constitution. "

As for Pakistan, Mullen repeated President Barack Obama's call for a stronger partnership with that country.

"He knows and our review showed that safe havens in Pakistan continue to allow al Qaeda and other extremist the opportunity to train and equip," Mullen said.

He said Pakistan understands the problem and how it is a threat to them. "Tactical urgency" must go hand in hand with "strategic patience" and trust must continue to be forged between the United States and Pakistan, he said.

"I have over the course of many months made clear to my counterpart in Islamabad, my strong desire to see more action taken against these places and to root out the terrorists in his country," he said.

"They have transformed part of their army into counterinsurgency experts, they have shifted a large portion of that army to the western frontier and they have accepted our help in training some of the special operations trainers."