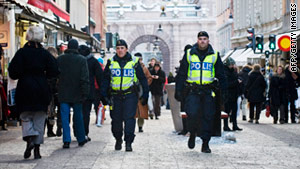 The advisory includes suggested tactics for countering attacks by terrorists who might have bombs or small arms.
STORY HIGHLIGHTS

Washington (CNN) -- U.S. officials say they have no specific and credible information about planned terror attacks on the United States, but they have issued an intelligence bulletin to state and local law enforcement warning terrorists could target large crowds at holiday gatherings.

The Department of Homeland Security and FBI issued an intelligence bulletin Wednesday to encourage law enforcement agencies to be watchful.

"Terrorists may seek to exploit the likely significant psychological impact of an attack targeting mass gatherings in large metropolitan areas during the 2010 holiday season which has symbolic importance to many in the United States," the bulletin says, a copy of which was obtained by CNN. "We continue to assess, however, the timing of a terrorist attack depends more on terrorists' readiness to execute an attack rather than a desire to attack on a specific date."

The law enforcement notice was intended to reach only state and local law enforcement groups. It suggests various tactics to counter any possible attack by terrorists who might have improvised explosive devices or small arms. Those suggestions include installing barriers to separate vehicles from crowds and posting added security people in areas where large numbers of people gather.

U.S. officials say issuing these advisories before holidays has become "standard practice" in recent years. The intelligence warning lists the types of gatherings and locations which could be attractive to terrorists including parades, religious and cultural activities, shopping malls, airports and public transportation systems, and sporting events.

Another feature of the advisories is to list recent events which law enforcement should keep in mind as they assess the intention of terrorists to attempt new attacks. This year's advisory notes the recent attempt by al Qaeda in the Arabian Peninsula to hide bombs in copiers and ship them to the United States as air cargo: the recent arrest of a naturalized American citizen who allegedly wanted to set off a vehicle bomb during a Christmas tree lighting in Portland, Oregon; two recent explosions set off in crowded shopping areas in Stockholm, Sweden; and the failed attempt of a naturalized U.S. citizen to set off a vehicle bomb in Times Square last May.

The bulletin only briefly mentions a holiday time terror attack which remains front and center in the minds of law enforcement and counterterrorism officials. Last Christmas a young Nigerian man named Umar Farouk Abdulmutallab allegedly tried to detonate an explosive device sewn into his underwear as his flight headed toward Detroit. Abdulmutallab pleaded not guilty earlier Thursday to new charges brought against him.

It does not mention information shared by Iraq it said came from captured insurgents who said al Qaeda in Iraq was planning suicide attacks in the United States and Europe over the holidays. A U.S. official said the report was being taken seriously, although there is no intelligence backing up the claims.

A U.S. counterterrorism official added there is no "new, specific credible threat to Europe." According to this official, a terror threat to Europe which came to light a few months ago has been disrupted but is not over.