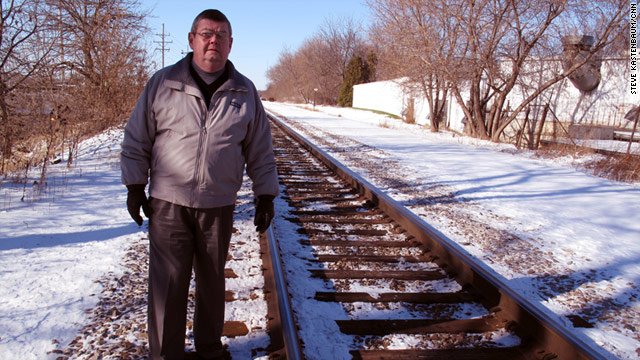 In Watertown, Wisconsin, Mayor Ron Krueger stands where a proposed train station was to be built.
STORY HIGHLIGHTS

(CNN) -- An Obama administration initiative that aims to create jobs and economic growth has been derailed in some states while it speeds along in others.

The loss of a total of $1.2 billion in high-speed rail funds in Wisconsin and Ohio means the promise of thousands of new jobs in those states will not be realized, according to proponents of the fast passenger trains.

The Obama administration wants to use large-scale infrastructure projects like high-speed rail to boost the economy much in the way that public works projects put people back to work during the Great Depression.

Mayor Ron Krueger was hoping a high-speed line that was planned to go through Watertown, Wisconsin, would spur development of retail and apartments in his town of about 23,000.

But some newly elected officials have put the brakes on those plans, raising questions about whether it's still possible to build big in the United States.

Citing two incoming governors' opposition to high-speed rail projects in the Midwest, Transportation Secretary Ray LaHood redirected $810 million away from Wisconsin and $400 million from Ohio to other states. California is getting the lion's share, $624 million for its link between Los Angeles and San Francisco. $342 million is going to Florida with the remainder divided among Washington and 10 other states.

Is the U.S. turning a corner on high-speed rail?

Along with the money comes jobs. In Wisconsin, the outgoing governor Jim Doyle claimed over 4,700 jobs directly related to the high-speed rail line between Milwaukee and Madison would have been realized at the height of construction.

Proponents claimed thousands of indirect jobs would have been created as a result of the projected economic growth along the line.

"Rail creates value," said Petra Todorovich at the Regional Plan Association, a transportation and public policy think tank in New York. She's the director of America 2050, a national initiative to meet the needs of the country over the next 40 years based on a projected population growth of 100 million. "It's a permanent investment both residential and commercial investors can look at. There are the construction jobs in working on the railroad," Todorovich said.

People in the area are also put to work building the locomotives and rail cars.

There are also indirect benefits that come with a new rail line, according to Todorovich. "There are jobs related through real estate and commercial investment. These are long-term jobs."

But Wisconsin's Republican Governor-elect Scott Walker said he has serious doubts about the projected job benefits related to the project. "The estimates, I think, are woefully optimistic."

Scott Walker campaigned on a promise to kill high-speed rail in Wisconsin, saying that it would leave the state with an annual operating cost of anywhere between $7.5 million and $15 million. "There are plenty of examples of federal Interstate Highway projects in the state of Wisconsin that have terrible, terrible needs right now that are being unmet that to me would be a much better use of transportation dollars," Walker said.

Officials at the U.S. Department of Transportation said that up to 90% of the operating costs could have been covered by federal grants.

Transportation Secretary Ray LaHood tried unsuccessfully to change Governor-elect Walker's mind before the funds were pulled. "There is no shortage of enthusiasm and energy in almost all 50 states in America for some form of high-speed inter-city rail," LaHood said.

Some of that enthusiasm was found in Florida which put out a request for proposals for a high-speed rail line to link Tampa with several locations in and around Orlando. Even though Florida received an additional $342 million from the Department of Transportation for the project, Governor-elect Rick Scott, a Republican, hasn't made up his mind on whether he'll allow it to proceed.

Scott has said he is concerned that the price tag for the line would exceed estimates. He is also concerned about operating costs, he said.

Meanwhile, work is beginning on a section of a high-speed rail line in California that planners hope will one day link Los Angeles with San Francisco.