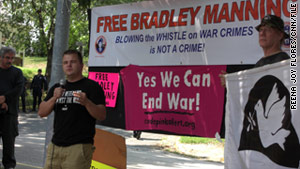 Activists protest Pfc. Bradley Manning's detention in August outside a Marine Corps base in Quantico, Virginia.

Berkeley City Council members offer opposing views on whether the California city should recognize Pfc. Bradley Manning as a hero.

San Francisco (CNN) -- To some, Army Pfc. Bradley Manning is nothing more than a traitor who's put lives at risk around the world. To others, he's a hero who revealed atrocities the U.S. military wanted to hide.

Tuesday night, the City Council in the anti-war enclave of Berkeley, California, is expected lend its voice to the debate.

The council is scheduled to consider a resolution that would call Manning a hero for allegedly leaking documents detailing U.S. activities in Iraq and Afghanistan.

The vote comes between proposals on how best to express concerns about efforts to identify and deport illegal immigrants and a motion to urge a radio network to put a morning talk show back on the air.

Manning is jailed by the Army on accusations that he leaked a video of a U.S. rocket strike in Iraq that killed several civilians. He is also implicated in the release of documents detailing U.S. military action in Afghanistan. The website WikiLeaks posted the video and documents.

The resolution, offered by the city's Peace and Justice Commission, says that if Manning did reveal the documents, then "he is a hero and we thank him for his courage."

The resolution calls on the Army to release Manning for revealing what the resolution calls war crimes, citing awards eventually given to soldiers who tried to stop a massacre of civilians during the Vietnam conflict as support for their position.

"Manning and the case against him now represent the culmination of all the horror and repression that we have experienced in the last decade," Bob Meola, a member of the commission and author of the resolution, told CNN. "The Berkeley City Council now has the opportunity to weigh in on the side of all that is right on the road to repairing the damage done to the world by the policies and the cover-ups of the last decade."

If the council does approve the resolution, it likely won't be a unanimous vote.

City Council member Gordon Wozniak said that while he opposes the U.S. wars in Iraq and Afghanistan, Manning's alleged release of confidential documents could make it harder to peacefully resolve international conflicts.

"If he did not like the war, the Army or the conduct of his country, there are ways to make his dissent known without breaking the law and damaging our country," he told CNN.

While most city councils spend the bulk of their time slogging through budget and zoning issues, forays into foreign policy are nothing new in Berkeley, long a hotbed for anti-war sentiment and political protest.

In 2003, the council passed a resolution opposing the war in Iraq and urging residents to participate in non-violent peace protests.

In 2008, the council declared U.S. Marine recruiters who had an office in the city "uninvited and unwelcome intruders" and applauded actions by residents to impede the Marines' work.

The council later rescinded the resolution and instead passed a statement saying it was opposed to the billions of dollars the United States had spent on wars in Iraq and Afghanistan.

The council doesn't restrict itself to U.S. foreign policy or military affairs, either. Earlier this year, the council passed a resolution opposing an anti-homosexuality law in Uganda.

Manning's supporters haven't waited for a resolution to call him a hero. Among other actions, they've built websites and Facebook groups that have attracted thousands of followers to their cause.

The largest, SaveBradley, has more than 16,000 supporters, many of whom say Manning has done more to help the country than harm it.

"When the few with a candle stand against the many surrounded by darkness... who should you laud," one supporter wrote Tuesday.

Critics of Manning's actions have been just as vocal.

On a Facebook page critical of Manning, one user wrote that "only hippies and terrorists support this traitor."

Conservative political leaders have also been critical. Among others, former U.S. ambassador John Bolton and Rep. Mike Rogers, R-Michigan, a House Intelligence Committee member, have told media outlets they believe Manning should be charged with treason and executed.