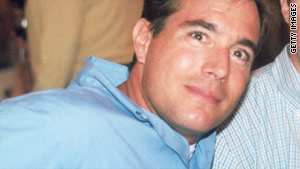 Mark Madoff in a 2001 photo. He was found hanging from a ceiling pipe in his Manhattan apartment on Monday.
STORY HIGHLIGHTS

(CNN) -- The death of Mark Madoff, the son of convicted Ponzi-schemer Bernard Madoff, was ruled a suicide by the New York City medical examiner's officer on Sunday, a day after the victim's body was discovered hanging from a ceiling pipe in his SoHo apartment.

Ellen Borakove, a spokeswoman for the medical examiner, said the autopsy was completed around 1 p.m. Sunday. Borakove said medical examiners will conduct toxicology and tissue tests on the body. The result, she said, will not be made public unless Madoff's next of kin asks for the case file.

Madoff killed himself two years to the day after his father was arrested for swindling $50 billion from investors in the largest Ponzi-scheme in U.S. history.

None of Madoff's immediate family members have commented on his death. However, the attorney who represents the victim's mother, Ruth, said she "is heartbroken."

The attorney, Peter Chavkin, responded by e-mail and said Ruth Madoff would not provide additional information.

Mark Madoff killed himself while his wife was out of town and his 2-year-old son was asleep in a nearby bedroom, early Saturday morning, authorities said. Madoff's body, fully clothed and hanging from a living room pipe, was discovered by his father-in-law around 7:30 a.m. The boy was not harmed.

"Mark was an innocent victim of his father's monstrous crime who succumbed to two years of unrelenting pressure from false accusations and innuendo," Flumenbaum said. "We are all deeply saddened by this shocking turn of events."

Bernard Madoff is currently serving a 150-year prison sentence for masterminding the largest Ponzi scheme in U.S. history. Madoff bilked investors out of $50 billion by masquerading his investment firm as legitimate when it was nothing more than a front. He used funds from new investors to send payments to his earlier investors, falsely portraying them as proceeds from investments, when they were actually stolen money, prosecutors said.

The 71-year-old Madoff pleaded guilty to the charges in 2009 and is now incarcerated at the Butner Federal Correction Complex, a medium-security prison in eastern North Carolina.

One filed on December 8 named Mark Madoff -- as well as his brother Andrew Madoff and uncle Peter Madoff -- as one of several defendants in a civil lawsuit.

The other defendants include JPMorgan Chase, HSBC, UBS, an Austrian banker, and two accountants who are accused of knowing about the fraud but covering it up and profiting from it.

So far, 16,394 claims have been filed by investors who say they lost money.