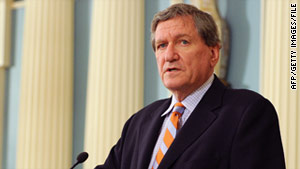 Washington (CNN) -- U.S. diplomat Richard Holbrooke was in critical condition at a Washington hospital Sunday night, after undergoing surgery on Saturday to repair a tear in his aorta, the State Department said.

Holbrooke underwent another procedure on Sunday to improve his circulation, the department said in a statement Sunday night. Relatives, friends, colleagues and staff are by his side, and his wife Kati Marton spoke Sunday with Afghan President Hamid Kharzai and Pakistani President Asif Ali Zardari.

The State Department did not provide details of Marton's conversation with the presidents.

"Many people would have succumbed," Axelrod said of the rupture.

Holbrooke, 69, fell ill Friday morning during a meeting with Secretary of State Hillary Clinton and walked down to the department's medical unit, a senior State Department official said. He was taken by ambulance to the hospital, the official said.

CNN's Chief Medical Correspondent Sanjay Gupta said the tearing of one of the layers of the walls of the aorta "happens suddenly." It typically is associated with high blood pressure and typically occurs in men between the ages of 50 and 70.

The location of the tear "would determine what, if any, other side effects would occur," Gupta said, adding that "this is different from a problem people think of with the heart where some of the blood vessels going to the heart become blocked."

An operation "typically involves bringing layers of the aorta back together so that no further dissection can occur," Gupta said. "If that's done quickly and the aorta is intact, meaning it hasn't opened up, that can be a very good procedure and can take care of the problem."