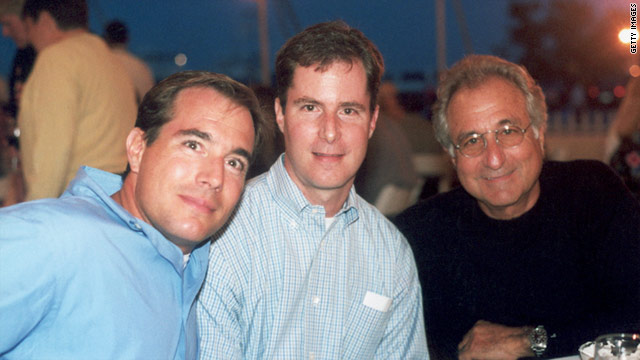 New York (CNN) -- Mark Madoff, the son of convicted Ponzi-schemer Bernard Madoff, apparently killed himself while his wife was out of town and his 2-year-old son was asleep in a nearby bedroom, New York police said Saturday.

Deputy New York Police Commissioner Paul Browne said Madoff's father-in-law discovered the body around 7:30 a.m. Saturday, while his grandson was sleeping in a back bedroom. Madoff was fully clothed and hanging from a ceiling pipe with a dog leash around his neck. The boy was unharmed.

Prior to his death, Madoff e-mailed his wife in Florida with "words to the effect that someone should check on his son," Browne said.

Neither Browne nor Police Commissioner Raymond Kelly would say if Madoff had left a suicide note. But Kelly said that Madoff sent multiple e-mails to various family members "during the morning hours" on Saturday.

The e-mails went out after after 4 a.m. Saturday, Browne said.

Police investigators were at Madoff's apartment to examine the circumstances surrounding his suspected suicide. Police allowed the medical examiner to remove Madoff's remains around 12:20 p.m., about 5 hrs after he was discovered. Crime scene investigators remained on the scene Saturday afternoon.

An autopsy will be conducted to determine the exact cause of death.

Madoff's death occurred on the second anniversary of his father's arrest.

"Mark Madoff took his own life today," Madoff's attorney Martin Flumenbaum said in a statement. "This is a terrible and unnecessary tragedy. Mark was an innocent victim of his father's monstrous crime who succumbed to two years of unrelenting pressure from false accusations and innuendo. We are all deeply saddened by this shocking turn of events."

Bernard Madoff is currently serving a 150-year prison sentence for masterminding the largest Ponzi scheme in U.S. history. Madoff bilked investors out of $50 billion by masquerading his investment firm as legitimate when it was nothing more than a front. He used funds from new investors to send payments to his more mature investors, falsely portraying them as proceeds from investments, when they were actually stolen money.

The 71-year-old Madoff pleaded guilty to the charges in 2009 and is now incarcerated at the Butner Federal Correction Complex, a medium-security prison in North Carolina. Madoff is scheduled to be released on Nov. 14, 2139.

One filed on December 8 named Mark Madoff -- as well as his brother Andrew and uncle Peter -- as one of several defendants in a civil lawsuit.

The defendants include JPMorgan Chase, HSBC, UBS, an Austrian banker, and two CPAs (and their families) who are accused of knowing about the fraud but covering it up and profiting from it.

So far, 16,394 claims have been filed by investors who claim to have lost money.