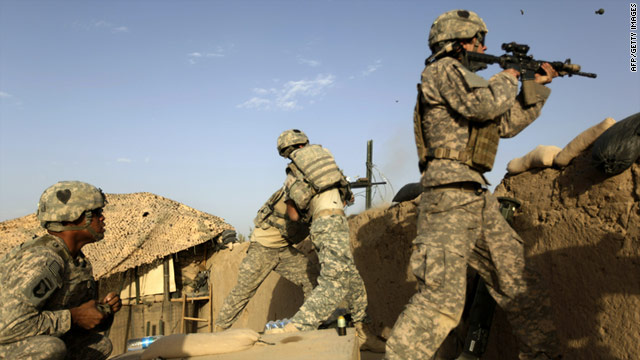 A new Pentagon report says the Army has the highest incident of mental disorders of the military branches. It says one factor is that the Army has taken the brunt of the action in Iraq and Afghanistan (above).
STORY HIGHLIGHTS
RELATED TOPICS

Washington (CNN) -- Mental problems send more men in the U.S. military to the hospital than any other cause, according to a new Pentagon report.

And they are the second highest reason for hospitalization of women military personnel, behind conditions related to pregnancy.

The 31-page report says mental disorders are a problem for the entire U.S. population, but that sharp increases for active duty military reflect the psychological toll of wars in Iraq and Afghanistan.

"Most notably in this regard, the rate of incident diagnoses of post-traumatic stress disorder (PTSD) increased nearly six-fold from 2003 to 2008," the report says.

And new outreach and screening, as well as the military's efforts to reduce the stigma attached to seeking treatment also contributed to higher numbers, according to the report.

The Army was hit hardest by the most common and long-lasting problems -- post-traumatic stress disorder, major depression, bipolar disorder, alcohol dependence and substance dependence, according to the report.

"The Army was relatively most affected (based on lost duty time) by mental disorder-related hospitalizations overall; and in 2009, the loss of manpower to the Army was more than twice that to the Marine Corps and more than three times that to the other Services," the report says.

"The Army has had many more deployers to Afghanistan and Iraq and many more combat-specific casualties; it is not surprising, therefore, that the Army has endured more mental disorder-related casualties and larger manpower losses than the other services."

"The only exceptions to this observation were in 2007, 2008, and the first two quarters of 2010 when the incidence rates of new diagnoses of alcohol dependence in the Marine Corps were the highest of all the Services," the report said.

But overall, the Marines were found to have fewer overall mental problems than the Army, Air Force and Navy with 4.3 percent of Marines versus 6.4-percent of the overall pool of active duty military.

Researchers call for additional study, and admit that tracking mental problems can be a moving target, as treatment and attitudes change.

"There are real and perceived barriers to seeking and accessing care for mental health disorders among military members. These barriers include shortages of mental health professionals in some areas and the social and military stigmas associated with seeking or receiving mental health care," the report says. "The nature and effects of these barriers to care have likely changed."