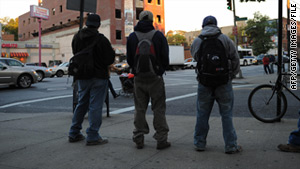 It is the first high court challenge to a variety of recent state laws cracking down on illegal immigrants, an issue that has become a political lightning rod.

The outcome could serve as a judicial warm-up for a separate high-profile challenge to a more controversial Arizona immigration reform law working its way through lower courts. That statute would, among other things, give local police a greater role in arresting suspected illegal immigrants.

With only eight justices hearing the spirited hour oral of oral arguments, the very real possibility of a 4-4 tie could leave all or parts of the Arizona business-sanctions law intact.

A variety of worst-case scenarios were offered from the bench over the legislation and its impact.

"What Arizona says has occurred here is that the (federal) scheme in place has not been enforced, and Arizona and other states are in serious trouble financially, and for other reasons, because of unrestrained immigration," said Justice Antonin Scalia. He called the Arizona law a "massive measure" of regulation.

Justice Ruth Bader Ginsburg suggested the law is mainly punitive in its intent, not purely regulatory, since companies violating the illegal hiring provisions would not be subject to financial penalties, but instead would have their licenses suspended.

She questioned the "anomaly that Arizona cannot impose a fine even in a modest amount, but it can revoke someone's license to do business."

In its lawsuit, the Chamber of Commerce argues federal law prohibits Arizona and other states from making E-Verify use mandatory. It has been supported by a variety of civil rights and immigration rights groups. The state argues its broad licensing authority gives it the right to monitor businesses within its jurisdiction.

The Obama administration recommended a judicial review, and is siding with businesses and civil rights groups.

The oral arguments centered on two fundamental questions: is the Arizona scheme a "licensing" law, and whether the E-Verify system could be made mandatory by states. An eventual ruling by the justices could split on the dual questions.

Carter Phillips, attorney for the plaintiffs, called the Arizona law a "death penalty" to businesses who could lose their licenses even for inadvertently hiring illegal workers. He pointedly said this is not a "licensing" law.

"States and municipalities issue all sorts of licenses," said a skeptical Justice Samuel Alito, using the home of the Supreme Court to offer a hypothetical. "If the District of Columbia were, after having enacted this (business license) requirement some years ago, were to pass a new ordinance saying, 'If you knowingly hire an illegal alien, your general business license can be forfeited,' would that cease to be a licensing law?" He hinted it would not.

"It seems to me that whatever wiggle room or ambiguity there may be in saying whether this is a license or not, Congress swept pretty broadly. It said, not just licensing laws, but licensing and 'similar' laws."

The swing vote in the dispute may lie with Justice Anthony Kennedy, who asked tough questions on both sides but appeared to offer a greater measure of support for the Arizona law. On the "licensing" question he was clear: "I see no limitation on what the state can decide is a license in any jurisprudential principle that you cited," he told Phillips.

On the other side, Justices Sonia Sotomayor and Stephen Breyer questioned the practical impact of the law, especially on those who are not hired by a business fearful of employing an illegal.

Breyer said the federal law offers a "careful balance" between avoiding discrimination and ensuring verification in the workplace. He noted separate $1,000 federal fines for businesses that knowingly discriminate on the basis of race, ethnicity or other factors -- and for lax hiring of undocumented workers.

"So Arizona comes along and says: I'll tell you what, if you discriminate, you know what happens to you? Nothing," said Breyer. "But if you hire an illegal immigrant, your business is dead. That's just one thing they do. Now, how can you reconcile that intent to prevent discrimination against people because of their appearance or accent with Arizona's law? If you are a businessman, every incentive under that law is to call close questions against hiring this person. Under the federal law every incentive is there to look at it carefully."

"The bottom line is that we believe that if the government isn't going to do the job then Arizona is going to do the job," she told reporters on the Supreme Court plaza. "We are faced with a crisis. And with regard to today's hearing, certainly we do issue licenses, and if we giveth, we can taketh away. And that's what we're hoping and banking on the Supreme Court's (upcoming) decision."

This case could serve as a bellwether to how the court will view a larger, more controversial state immigration law from Arizona. Much of that statute was tossed out by a federal judge in August and is currently pending at a federal appeals court. It would among other things, give police authority to check a person's immigration status if officers have a "reasonable suspicion" that the individual is in the country illegally.

Newly appointed Justice Elena Kagan has withdrawn from the E-Verify case because of her earlier involvement in the appeal process while serving as solicitor general in the Obama administration. She has recused herself in about two dozen current and pending cases so far, leaving the possibility of a split 4-4 high court. When that happens, the lower court ruling prevails but no precedent is set.