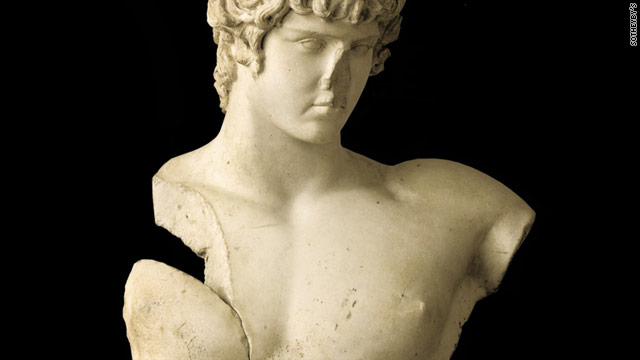 The 33-inch tall marble bust of Antinous has been traced back to between 130 and 138 A.D.
STORY HIGHLIGHTS
RELATED TOPICS

New York (CNN) -- A marble portrait bust of Antinous -- the companion Roman Emperor Hadrian had declared a god -- sold for over $23 million, exceeding the high estimate of $3 million, at Sotheby's on Tuesday.

The bust, which is identified by an inscription, is the only known Classical representation of Antinous other than his coin portraits, according to Sotheby's.

Antinous was a member of the Roman Emperor Hadrian's entourage and became his beloved companion. After Antinous died in 130 A.D., Hadrian had Antinous proclaimed a god and encouraged the erection of "deified" monuments to Antinous during his reign.

As Sotheby's auctioneer Hugh Hildesley opened the bidding at $900,000, very few, if any, of the attendees at the auction Tuesday night would have expected the bidding for the bust to surge past the high estimate.

A European collector, who was present during the auction, entered the bidding session after it reached $6.5 million and after a total of 11 minutes, was the new owner of the bust, prevailing over four other bidders.

A Sotheby's spokesman noted that when the hammer finally fell, and the final price of $23,826,500 was announced, the room broke out in applause. The European collector chose to remain anonymous.

"The Roman Imperial Marble portrait Bust of the Deified Antinous" was the featured item in the auction of antiquities from the collection of philanthropist Clarence Day, who died in 2009. The proceeds of the Tuesday sale from the Day collection, which exceeded $36 million, will benefit charities.

Elizabeth Bartman, vice president of the Archaeological Institute of America, an organization that supports archaeological research and publication and protects the world's cultural heritage, said the bust is an extraordinary piece.

While the institute frowns on the sale of undocumented pieces, Bartman said, the bust is legitimate, with a provenance that can be documented back to the early 19th century.

"Prices for very fine antiquities have been going up steadily. They are rare and unique." Bartman said.

Bartman who specializes in Roman antiquities and had an opportunity to view the bust during a preview, said it is very well preserved.

People have long admired marble sculpture and consider it the epitome of art, she said, but she does have one concern: "I hope this piece ends up in a public collection for all to see and not squirreled away in some vault," she said.