Expert: U.S. could face hurdles in extraditing Assange from Sweden 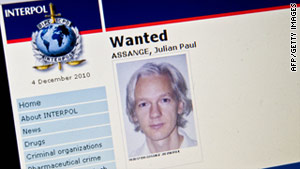 Julian Assange has been sent to a British jail until at least December 14.
STORY HIGHLIGHTS
RELATED TOPICS

(CNN) -- The arrest of WikiLeaks founder Julian Assange by British police on a Swedish arrest warrant could presage a long legal battle if the United States wants to extradite him, particularly if Assange is first extradited to Sweden, experts said Tuesday.

A British judge sent Assange to jail until at least December 14 while a court decides whether to order the extradition. Assange, 39, is suspected of one count of rape, two counts of sexual molestation and one count of unlawful coercion -- or illegal use of force -- allegedly committed in August, according to the Swedish warrant. He was arrested after turning himself in at a London police station.

U.S. Attorney General Eric Holder said Monday that he has authorized "significant" actions related to a criminal investigation of WikiLeaks. The site has been under intense pressure from the United States and its allies since it began posting the first of more than 250,000 U.S. State Department documents November 28.

"Certainly, when the attorney general of the United States holds a press conference, as Eric Holder did, and said, 'We think this individual is involved in criminal activity,' you would think and I would think that that would lead to American criminal charges," CNN senior legal analyst Jeffrey Toobin said. "It hasn't yet, but it certainly seems like the United States is not simply going to leave this entire matter to the Swedish courts. It seems inconceivable."

However, if Assange is extradited to Sweden, "the main issue here is, in this case ... does Sweden view the alleged acts in the same way as, in this case, the United States?" Mark Ellis, executive director of the International Bar Association, said Tuesday. "Is it illegal in Sweden, for instance, to do what he did?"

The United States' alleging that he violated U.S. law would not necessarily be sufficient for an extradition under Swedish law, he said. There would have to be an agreement Assange's alleged actions violated U.S. and Swedish law, Ellis said.

"We're in for a long process if another state, a non-EU state (like the United States) decides they want to extradite him back," he said.

Toobin said last week that it may be easier for the United States to get their hands on Assange if he were to be arrested in Britain, as the two countries enjoy close law-enforcement ties.

Some U.S. politicians have called for Assange to face charges related to the leaks, and prosecutors may have obtained a sealed arrest warrant, Toobin said last week. White House spokesman Robert Gibbs has declined to comment on that possibility when asked about it on CNN's "American Morning."

"Our investigation is ongoing," State Department spokesman P.J. Crowley said Tuesday. "And beyond that -- as to (Assange's) arrest -- this is, at this point, an issue between Britain and Sweden. What we're investigating is a crime under U.S. law -- the provision of 250,000 classified documents from someone inside the government to someone outside the government is a crime." The United States, he said, will "hold those responsible fully accountable."