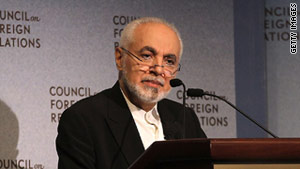 New York (CNN) -- The controversial head of a Muslim congregation in New York announced the launch of a "multinational, multifaith movement" meant to improve understanding and build trust between "people of all cultures and faith traditions," according to a statement released Tuesday.

Imam Feisal Abdul Rauf, the public face of a recent political firestorm surrounding the construction of an Islamic center in Lower Manhattan, is now spearheading what he calls the Cordoba Movement.

The initiative is meant to broaden his groups' work in promoting religious tolerance and "expand learning among Muslims, Jews, Christians and people of all faiths," the statement said.

"We must retake the discourse among religions and cultures from the hands of the extremists around the world who benefit from hatred and violence," Rauf said in the statement. "We must stop this downward spiral of hatred, mistrust and misunderstanding if our world is to have a peaceful future."

It is unclear how the initiative will work to accomplish that goal.

Imam: This is not sacred ground
RELATED TOPICS

Rauf ran into opposition in his efforts on behalf of Park 51, a 13-story Islamic community center that would be two blocks from the former site of the World Trade Center.

The center is part of a collaboration between the American Society for Muslim Advancement and the Cordoba Initiative. It is to feature a mosque, performing arts center, a gym, a swimming pool, and other public spaces.

Its proximity to the location where two commercial jets hijacked by Muslim extremists crashed into the twin towers of the trade center in 2001 prompted protests that drew the issue into a global debate over Islam's place in the United States.

Some six in 10 Catholics and Mormons think another location should be found, according to a recent Gallup survey. Less than a third of Muslims, other non-Christians and non-religious Americans feel the same way, the survey found, and Protestants and other Christians fell in the middle.

Last month, organizers said they canceled a Thanksgiving prayer service at the site that was to feature joint appearances by a Christian minister and a rabbi, citing scheduling conflicts.

The new project is an effort to counter accusations from congressmen and talk-show hosts that link Muslim terrorism to the broader Islamic religion, Tuesday's statement said.

"The Islam that I have studied all my life, the Islam that I preach, is all about worshipping God and loving your neighbor," Rauf said. "The same core values are common to all the world's cultures and faith traditions. These are the same values of life, liberty, and the pursuit of happiness on which the United States was founded."