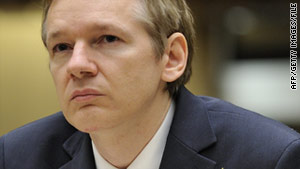 (CNN) -- Under heavy pressure from the United States and allied governments, WikiLeaks appealed to supporters worldwide to mirror its website Sunday as it continued the process of releasing thousands of sensitive U.S. diplomatic cables.

"Wikileaks is currently under heavy attack. In order to make it impossible to ever fully remove Wikileaks from the Internet, we need your help," the site told followers Sunday. The message was followed by instructions on how website operators could set up mirror sites that would distribute the documents as WikiLeaks released them.

On the microblogging site Twitter, supporters have rallied by offering their sites or by posting links to other mirrors. In an echo of "Spartacus," the 1960 film classic about a slave revolt against ancient Rome, many adopted the hashtag #imwikileaks.

"All the censoring of WikiLeaks is more alarming than the actual content of the leaks. It only further justifies WL's actions," read one widely distributed comment.

WikiLeaks, which facilitates the anonymous leaking of secret information, began posting the first of more than 250,000 U.S. State Department documents last week. Since then, the site has been hit with denial-of-service attacks, been kicked off servers in the United States and France, and lost a major revenue source on Friday when the U.S.-based PayPal cut off its account.

PayPal said WikiLeaks violated its policy against activities that "encourage, promote, facilitate or instruct others to engage in illegal activity." And a U.S.-based domain name provider shut down WikiLeaks early Friday, but the controversial website announced hours later that it had employed a company in Switzerland and was back up.

In addition, Swedish authorities have issued an arrest warrant for the site's founder, Julian Assange, on unrelated allegations of sex crimes, including rape. Assange has denied the accusations, calling them a smear campaign.

The Obama administration has condemned the disclosures, arguing that they harm U.S. diplomacy by exposing confidential communications. A variety of U.S. and Western figures have called for Assange to be prosecuted or even killed.

"I think the man is a high-tech terrorist," Senate Minority Leader Mitch McConnell, R-Kentucky, told CBS' "Face the Nation" on Sunday. "He has done enormous damage to our country. And I think he needs to be prosecuted to the fullest extent of the law."

But Secretary of State Hillary Clinton managed to make a joke about it at a Washington event Saturday night. Speaking at a dinner for the Kennedy Center Honors, Clinton praised the "full breadth and depth of American artistry and diversity," adding, "I am writing a cable about it, which I'm sure you'll find soon on your closest website."

Richard Haass, president of the Council on Foreign Relations, told CNN's "Fareed Zakaria GPS" that the WikiLeaks disclosures were "a gaffe on a large, global scale." But he added, "This is not a crisis. It's not a disaster."

The documents released so far have featured sharp U.S. criticism of the government of Afghanistan, where an American-led coalition has been fighting al Qaeda and the Taliban since 2001; intense mistrust between the United States and Pakistan, a nuclear-armed state where top al Qaeda and Taliban figures are believed to be in hiding; blunt assessments of the extent of corruption in Russia; and unflattering descriptions of allied leaders like Italian Prime Minister Silvio Berlusconi, whom one 2009 cable described as "a complete mess."

The prime suspect in the disclosure is Bradley Manning, a U.S. soldier now awaiting trial in a Virginia stockade. Manning, a private first class who served as an Army intelligence analyst in Iraq, is charged with leaking video of a 2007 helicopter attack in Iraq to WikiLeaks and with illegally transferring classified data.

U.S. officials have said Manning was able to access a wide variety of documents through a computer system that was set up to promote information-sharing after the September 11, 2001, attacks on New York and Washington. But Haass warned against an "overreaction" that will cause American agencies to share too little intelligence.