Land that belonged to 'Unabomber' for sale 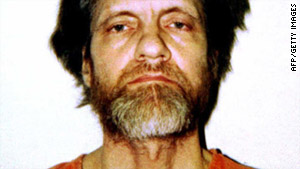 The 1.4-acre parcel Ted Kaczynski owned a few miles south of Lincoln, Montana, is up for sale for $69,000.
STORY HIGHLIGHTS
RELATED TOPICS

(CNN) -- For 17 years, Ted Kaczynski meticulously prepared his instruments of death from a cabin on a remote piece of property in western Montana.

The former math professor eschewed modern comforts, like electricity or water, in the small wooden building where he made the mail bombs that would make him infamous. He also drew up an angry 35,000-word anti-technology manifesto.

The cabin is long gone, housed in the Newseum in Washington, D.C.

Kaczynski, 68, is long gone, too. He is serving a life sentence at a federal supermax prison in Colorado.

All that's left in Lincoln, Montana, are the notoriety for about 1,500 townspeople and the 1.4 acres Kaczynski once owned a few miles south of town.

"It's very secluded. Hardly any one goes up there," says John Pistelak, who runs a realty company in town and is handling the sale. "I've had all kinds of calls."

The land is much quieter than it was in the weeks after the arrest as agents scoured it for clues into the Unabomber's diabolic plans and anger.

A few bottles and the remains of a root cellar are still evident, according to Pistelak.

A real estate brochure reads, "Own a Piece of U.S. History: Home of the Unabomber." It also touts the plot's proximity to wilderness areas and "great fishing and hunting."

Pistelak acknowledges the land normally would go for no more than $50,000.

But this wooded patch of land, which is being sold by a friend of his, is different, Pistelak says.

"With the history, it's got to be worth something," he said.

Wendy Gehring, who knew Kaczynski and was a neighbor, said she doesn't buy the man's reputation as a naturalist.

"I have nothing good to say about him," she told CNN Saturday, saying he looked down on her because she is a woman. "The town doesn't really give a rat's ass about Ted Kaczynski."

Gehring and her husband, Clifford, operate a lumber business and saw mill. Kaczynski complained about the noise and said it disturbed his peace, Gehring said.

For a while, the Unabomber lived a hermit's life, later emerging to ride his bicycle to town.

"We thought he was D.B. Cooper," said Gehring, referring to the famous hijacker who disappeared after parachuting from a flight, likely over Washington state, in 1971.

Clifford Gehring identified Kaczynski when agents made the April 1996 arrest on the property.

It has not been inhabited since the arrest. A prospective buyer could run power on the property from a few lots down, Pistelak told CNN Saturday.

Kaczynski quit a tenure-track position at the University of California-Berkeley in 1969 and, soon after, he and a brother built the shack.

Federal agents gave the case the code name "Unabom" because universities and airlines were the early targets.

Along with the deaths and injuries he inflicted, Kaczynski threatened to blow up airplanes, and placed a bomb on one flight in 1979, forcing the plane to make an emergency landing when a fire broke out in the cargo hold.

Agents closed in after his brother noted similarities between his old letters and journals and the bomber's manifesto.

Some areas on the property are surrounded by chain-link fences, vestiges of the federal investigation. Interestingly, Pistelak says, there are no gates in the fences.

In 1999, Kaczynski told Time magazine he "would rather get the death penalty than spend the rest of my life in prison."

In an interview at the federal prison in Florence, Colorado, he also said he is sane.

"I don't get delusions and so on and so forth. I mean, I had very serious problems with social adjustment in adolescence, and a lot of people would call this a sickness. But it would have to be distinguished between an organic illness, like schizophrenia or something like that."

Kaczynski said he pleaded guilty in 1998 only to stop his lawyers from arguing that he was a paranoid schizophrenic, as court-appointed psychiatrists had diagnosed.

In it, he said his brother's decision to turn him in was a way of settling a sibling rivalry. His brother was jealous "over the fact that our parents valued me more highly."

In the Unabomber Manifesto, Kaczynski claimed a moral high ground for his bombing campaign, justifying the attacks in the name of preserving humanity and nature from the relentless onslaught of technology and exploitation.

But in his journals, the government said, Kaczynski scoffed at environmental ideals.

The journals, found by FBI investigators in his Montana mountain cabin, revealed a cynical, apparently sexually confused killer who delighted in his deadly explosions and cared little for the outside world.

"I believe in nothing," Kaczynski wrote. "I don't even believe in the cult of nature-worshipers or wilderness-worshipers. (I am perfectly ready to litter in parts of the woods that are of no use to me -- I often throw cans in logged-over areas.)"

Of his killings, Kaczynski wrote: "My motive for doing what I am going to do is simply personal revenge."

The Unabomber got no sympathy from victims and their families.

Susan Mosser, who lost her husband in a Unabomber attack, urged the federal judge to "make the sentence bullet-proof, or bomb-proof, lock him so far down that when he does die, he'll be closer to hell. That's where the devil belongs."