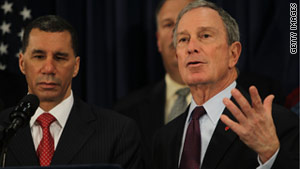 (CNN) -- New York could be the first state in the country to impose a limited ban on a controversial method of drilling for natural gas.

This week, the state assembly passed a hydraulic fracturing moratorium bill, which is currently en route to New York Gov. David Paterson's desk. He will have 10 days from then to take action.

In the past, Paterson has expressed concern about hydraulic fracturing, which involves cracking thousands of feet beneath the earth's surface to get at valuable natural gas. It is unclear if the governor will sign or veto the legislation.

"He'll hear what everybody has to say," a representative of the governor's office told CNN. She would not provide her name.

The assembly voted 93 to 43 Monday night to place a temporary moratorium on hydraulic fracturing, so the state can investigate the safety and environmental concerns. The state Senate passed a similar bill in August.

The moratorium -- which would only be in effect until May -- seeks to halt new drilling permits for horizontal hydraulic fracturing, dubbed "fracking," a controversial method of extracting natural gas.

The drilling process has come under scrutiny because of the potential effects on drinking water, public health and the environment.

If signed into law, New York would be the first state to impose a fracking moratorium, according to the U.S. Environmental Protection Agency.

The proposed moratorium in New York was described as "misguided" by Kathryn Klaber, who represents a large natural gas industry coalition in the northeast United States.

"Tightly-regulated, environmentally sound natural gas development in New York can and will deliver a much-needed and long-lasting economic shot in the arm to not only communities along the Southern Tier, but for the entire state, just as it is in Pennsylvania, West Virginia and elsewhere," said a written statement from Klaber, president of the Marcellus Shale Coalition.

The process has raised concerns about whether those chemicals are contaminating the underground water. Some residents near hydraulic fracturing drill sites along the Delaware River Basin -- located in Delaware, New Jersey, New York, and Pennsylvania -- have been able to set their water on fire.

Several residents in rural Pennsylvania have filed a lawsuit against Cabot Oil & Gas, blaming the company for the contamination.

The EPA is currently reviewing its position and plans to issue its report in 2012.

New York City gets roughly half of its water from the Delaware River Basin, which was recently named the country's most endangered river because of the threat of natural gas.

"The stakes are high," Bloomberg wrote in a November 17 letter to the Delaware River Basin Commission's Executive Director Carol Collier.

"The City has invested more than $1.5 billion in watershed protection programs that have resulted in improved water quality throughout our watershed, as well as to our releases downstream, which benefit all members of the Commission, and the 15 million people who rely on the Delaware River watershed for clean drinking water," Bloomberg wrote.

The concerns have prompted an EPA study of the potential problems with fracturing and public hearings to help decide how to conduct the study are almost finished.

The EPA -- which held public meetings this year in Binghamton, New York; Canonsburg, Pennsylvania; Fort Worth, Texas; and Denver, Colorado -- plans to begin its actual study in January 2011 and release initial study results by late 2012.