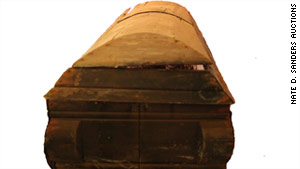 On that day, 1,300 miles to the southwest, the man accused of killing him was quietly and simply buried in Fort Worth, Texas. Lee Harvey Oswald's remains were interred in a simple pine coffin with the help of volunteer pallbearers.

The deteriorated coffin, which was replaced after Oswald's body was exhumed briefly in 1981, is now up for auction.

A Fort Worth mortuary owner is selling the box, which had a bid of $5,000 on Wednesday.

Also for sale are an Easter card signed by Oswald, a first draft of his death certificate, funeral records, an embalming table used to hold Oswald's body and assorted mortuary instruments.

Another seller is auctioning a patch of seat leather from the limousine that carried Kennedy and first lady Jacqueline Kennedy through the streets of Dallas, Texas, during the shooting November 22, 1963.

Funeral director Allen Baumgardner, 68, who assisted at the original embalming, purchased Miller Funeral Home along with all of its property. "He felt the time was right to sell," said Laura Yntema, auction manager at Nate D. Sanders.

Asked about the macabre nature of some of the items, Yntema said "this is definitely a special situation." Collectors look at the items more for their historical value, she said.

Oswald was buried one day after nightclub owner Jack Ruby (born Jack Rubenstein) fatally shot him at Dallas Police headquarters while he was being transferred to the county jail.

The death certificate draft lists "shot by Jack Rubenstein" under a section asking how the fatal injury occurred. The name was scratched out because Ruby, who died in 1967, had not been tried. Another death certificate was officially filed.

Oswald's body was exhumed in October 1981 during a fierce legal battle between his widow, Marina, and brother Robert.

Conspiracy theories abounded over whether a Soviet agent was actually buried in the grave. Marina Oswald won the dispute, and the coffin was exhumed, according to the auction house.

"As Lee Harvey Oswald's coffin was lifted, evidence of extensive water damage to the casket was apparent," said the company.

Pathologists identified the decomposed remains as Oswald's, and he was reinterred in a new casket and vault.

Serious collectors and museums are likely those most interested, Yntema said.

The Sixth Floor Museum at Dealey Plaza, site of the assassination, is not interested in the coffin, curator Gary Mack told CNN.

"It doesn't really fit what we collect," he said. The nonprofit museum is in a building that once housed the famous Texas School Book Depository. Oswald is believed to have fired on Kennedy from an area that is now part of the museum.

The museum is focused more on the events of November 22, 1963, and has a large collection of films, photos and local news coverage archives, Mack said.

Mack related an account of the burial of Oswald at Shannon Rose Hill Memorial Park in Fort Worth.

Two newsmen from competing news wire services volunteered to serve as pallbearers, he said. The funeral was attended by federal agents, police officers and five family members, according to the Dallas Morning News

Jennie Roberts, a spokeswoman for Service Corp. International, which owns the cemetery, said she could not discuss any details on the grave or visitors because of privacy policies. Visitors are not allowed to take photographs, Roberts said.