WikiLeaks: U.S. ambassador on Mugabe, 'The End is Nigh' 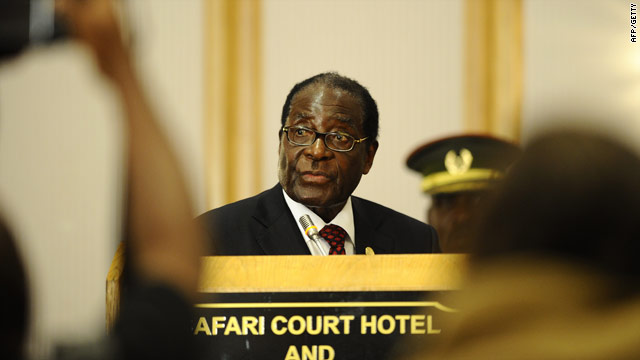 (CNN) -- More than three years ago, the outgoing U.S. ambassador in Zimbabwe, Christopher W. Dell, wrote a valedictory note about the government of President Robert Mugabe. It was titled simply "The End is Nigh."

His advice to the U.S. State Department: "Stay the course and prepare for change" in the southern African nation. Today, President Mugabe is still in place, though he now heads an uneasy power-sharing government with the opposition Movement for Democratic Change (MDC).

The cable, dated July 2007, is one of thousands obtained by WikiLeaks, some of which were published Sunday in The New York Times and four European newspapers that had advance access to the documents. Dell goes on to characterize Mugabe, who has been in power since 1980, as "a brilliant tactician" who is "more clever and more ruthless than any other politician in Zimbabwe."

He also believes Mugabe is "hampered by several factors: his ego and belief in his own infallibility." He notes that contacts within the ruling party, the ZANU-PF, are desperately seeking reform but acknowledge that it won't happen while the "Old Man" is still there.

Mugabe has been in power in Zimbabwe since its independence in 1980. Once one of Africa's wealthier nations, with a thriving agricultural sector, it has deteriorated into economic and social turmoil. In 2007, the same year the cable was written, Zimbabwe had the highest inflation rate in the world at 66,212 percent, according to the International Monetary Fund.

Fuel and food shortages prompted Dell to say "for the first time the president is under intensifying pressure simultaneously on the economic, political and international fronts" and that Mugabe was "running out of options." He says it up to the U.S. "once again, to take the lead, to say and do the hard things."

He admits in 2007 that Mugabe will "not wake up one morning a changed man, resolved to set right all he has wrought. He will not go quietly nor without a fight. He will cling to power at all costs."

Dell added: "Mugabe and his henchman are like bullies everywhere: if they can intimidate, you they will. But they're not used to someone standing up to them and fighting back."

According to the cable, Dell said the "optimal outcome ... is a genuinely free and fair election, under international supervision." Thabo Mbeki, former president of South Africa, had been trying to mediate in Zimbabwe and had, according to Dell, "the best, albeit very slim, hope of getting there."

When considering possible Mugabe successors, Dell is less than impressed with the options.

He calls the MDC "far from ideal" and is "convinced that had we [the U.S.] had different partners, we could have achieved more already." He goes on to lament that the current leadership would "require massive hand-holding and assistance should they ever come to power."

Morgan Tsvangirai, prime minister and MDC head, is characterized by Dell as a "brave, committed man" with "star quality." However, Dell criticizes Tsvangarai as being "not readily open to advice, indecisive and with questionable judgment in selecting those around him."

Perhaps most tellingly Dell says of the MDC leader: "Zimbabwe needs him, but should not rely on his executive abilities to lead the country's recovery."