U.S. role in Yemen covered up by its president, WikiLeaks file reveals 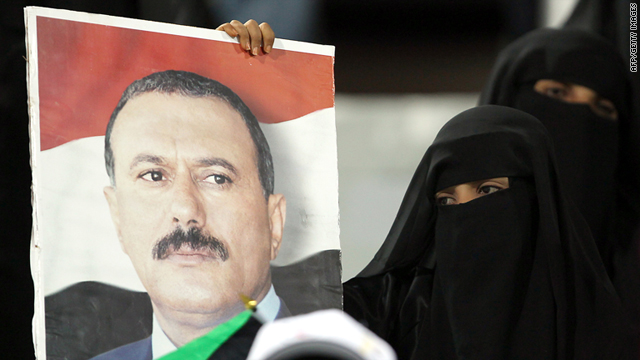 A fan holds a picture of Yemen President Ali Abdullah Saleh during the 20th Gulf Cup in Abyan on Sunday.
STORY HIGHLIGHTS

Washington (CNN) -- In public, Yemeni President Ali Abdullah Saleh has consistently played down any U.S. military role in air strikes against al Qaeda targets in Yemen, but one of the secret U.S. cables published by WikiLeaks paints a different picture.

In a meeting with U.S. Gen. David Petraeus in the capital of Sana'a in January, President Saleh agreed to continue covering up the latest plan to use U.S. fixed-wing bombers with precision weapons to attack terrorists in his country. The Yemeni president told Petraeus that would be preferable to the continued use of long-range cruise missiles, which Saleh said were "not very accurate."

"We'll continue saying the bombs are ours, not yours," Saleh said, according to the diplomatic cable written by the U.S. ambassador at the time, Stephen Seche. That comment prompted Saleh's deputy "to joke that he had just 'lied' by telling Parliament" that the U.S.-made bombs were used in attacks by Yemeni forces.

Yemeni and American officials are reluctant to publicly acknowledge the U.S. role, because it could cause a backlash in Yemen. The country is a hotbed of al Qaeda activity and is considered the launching point for recent attempts to take down airplanes using explosives. The home of radical Yemeni-American cleric Anwar al-Awlaki is based in Yemen.

We'll continue saying the bombs are ours, not yours
-- Yemeni President Ali Abdullah Saleh, according to leaked cable

"I'm not going to get into the nature of, the specific nature, of our counterterrorism efforts with out partners because that would be counterproductive to what we are trying to do," Whitman said.

The cable about the January 2, 2010, meeting goes into great detail about the U.S. offer of aid and training and the Yemeni counteroffers.

U.S. Special Forces troops have recently expanded the type of training they're giving to Yemen's military, while also adding more Special Operations forces to the training mission there. A Defense official with knowledge of the counterterrorism effort calls it "more complex training" that combines air support with tactical operations on the ground.

Earlier this year, Defense Secretary Robert Gates approved spending $150 million to train and equip Yemen's security forces, specifically so they can fight al Qaeda. That includes helicopters, planes and other equipment. It more than doubles the amount of aid the U.S. military authorized in 2009. A senior defense official says the U.S. and Yemen have shared surveillance and intelligence on al Qaeda in the Arabian Peninsula activity inside the country.

Concerns about Yemen came up in other State Department cables.

In March 2009, White House counterterrorism chief John Brennan discussed with Saudi King Abdullah the potential of al Qaeda finding safe haven in Yemen as in the tribal areas of Pakistan.

The diplomatic communique from Riyadh said Brennan warned that the U.S. feared Yemen could become another Waziristan [an unstable area in northwest Pakistan], and urged that the U.S. and Saudi Arabia needed to work together to keep al Qaeda in Yemen from growing even more dangerous.

The king replied that having Somalia next door to Yemen only adds to the danger.