Embassy cable tells of American's escape from Iran on horseback 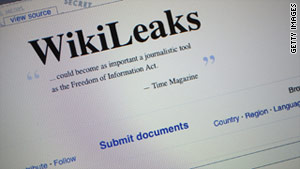 (CNN) -- The tens of thousands of diplomatic cables obtained by WikiLeaks and released Sunday are full of policy discussions and geo-strategic issues -- but they also tell some fascinating human stories.

One such cable, sent from the American embassy in Turkey last year, tells of an elderly U.S. citizen's escape from neighboring Iran -- on a horse.

The cable, sent on February 11, 2009, says that 75-year old Hossein Ghanbarzadeh Vahedi had been refused permission to leave Iran to return to the United States after visiting relatives the previous year.

Vahedi -- a dentist from Los Angeles, California -- had traveled to Tehran in early May 2008 and spent four weeks with family and friends without incident.

But at Tehran airport, as he prepared to return home, his passport was confiscated.

"Thus began a seven-month ordeal in which Vahedi appeared almost daily at the court to request that his passport be returned," the cable continued.

Vahedi was born in Iran but left after 1979's Iranian Revolution and is a naturalized U.S. citizen.

As he became increasingly pessimistic about getting his passport back, Vahedi considered options for slipping out of Iran, including crossing into Iraq and smuggling himself onto a ship crossing the Gulf.

In the end, he decided on the mountainous trek into Turkey.

"In spite of temperatures hovering around zero degrees Fahrenheit," the cable says, "Vahedi chose the early part of January because it coincided with the Shia commemoration of Ashura and he thought it likely the police would be more preoccupied."

On January 7, 2009 Vahedi began his odyssey -- first by bus to the city of Urmia and then with a driver into the foothills of the Zagros Mountains. There he met two men with a horse who would escort him to the Turkish border.

According to Vahedi's account, related in the cable, he "did not have clothing appropriate for the weather and had a very difficult time with the cold. As an inexperienced rider hours into the climb Vahedi lost his concentration and fell off the horse tumbling into the woods."

The horse appeared to know exactly where it was going, and was often ahead of his guides, Vahedi later told U.S. officials. He speculated that it might have been used on the route many times before to smuggle drugs across the border.

After a fourteen-hour trek, he and his guides were met at the Turkish border by another man, who took him to catch a bus for the ten-hour journey to Ankara. The cable says he arrived at the U.S. Embassy's consular section with some aches and pains but was otherwise in good health. Altogether, Vahedi told U.S. officials, he had paid his guides $7,500.

As for why his passport was confiscated, Vahedi said one reason might have been extortion. According to the cable, "it was made clear to him informally by the authorities at the court that if he paid a $150,000 fine, the process would move more quickly."

Vahedi also suggested to US diplomats that the Iranian authorities may have been unhappy about two pop groups of expatriate Iranians represented by his sons. The cable notes: "According to Vahedi, while the singers are simply Persian pop singers, they have gotten crowds riled up with occasional anti-regime rhetoric."