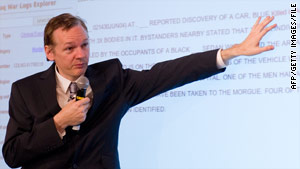 Wikileaks' Julian Assange shows a page from the release of Iraq war documents at an October briefing in London.
STORY HIGHLIGHTS
RELATED TOPICS

James F. Collins, ambassador to Moscow from 1997 to 2001, and director of the Russia and Eurasia Program at the Carnegie Endowment for International Peace, said the expected online disclosure has to be taken seriously.

"Leaking information of this kind will be detrimental to building the trust among officials necessary to conduct effective and productive diplomacy. It will impede doing things in a normal, civilized way," Collins said.

He added, "I would think the information they will leak is likely to contain analysis, records of discussions or reporting on confidential conversations between officials or official policy recommendations or suggestions about policy or diplomatic actions."

A threat by Wikileaks to publish new disclosures has sparked a massive review of diplomatic documents by the State Department. A source tells CNN that every diplomatic mission document, from 2006 to 2009, is under review as the website threatens to release millions of pages of classified embassy information soon.

The information blitz from WikiLeaks would offer a glimpse into the worldwide communications of the State Department and its 297 embassies, consulates and missions -- through what commonly are referred to as "cables."

Embassies send Washington "reporting" telegrams that can include analysis by embassy officers of developments of importance to U.S. policy in their country or they may report meetings that the ambassador or other embassy officials had with officials in their host country. They also can contain substantive policy recommendations and observations. In addition, there are housekeeping and operational messages that are dedicated to the daily operations and needs of diplomatic offices and personnel.

Telegrams are an essential means for keeping U.S. diplomats informed about policy and views in Washington and to alert them to important developments. The State Department sends "worldwide" telegrams to its missions around the world, "regional" telegrams to a select number of posts and telegrams to individual posts.

"They can be informational," Collins said, "telling the ambassador and his or her staff about a policy initiative, for example: They can send texts of speeches, convey in-house information the Department of State wants embassies to be aware of or provide the reasoning behind policy, what Washington wants clearly understood."

Another kind of telegram contains official instructions. "It says to an ambassador 'go take this action,'" Collins said, "instructing the ambassador or his staff, for example, to 'see so and so and seek his support for an American position on Afghanistan,' for example. As an ambassador you would take that instruction, for example and, using it, seek out the appropriate person in the Foreign Ministry and make the case Washington has asked to be conveyed."

He said, "The most sensitive kinds of telegrams are instructions such as those to negotiators. These instructions were routinely sent to our negotiators on the START treaty or to those carrying on negotiations with allies about next steps in Afghanistan."

Collins said his major concern about leaking telegraphs and other official communication is that "you cannot conduct business between governments effectively on CNN or in the news media. People with whom you talk on a confidential basis, where you're talking as government to government, or representative of government to representative of government and discussing something, implicitly assume that the confidentiality of the discussion will be preserved. Sure, everyone understands that you're going to report back to your own government what you said and what you heard, but they don't expect to see the exchange in the newspapers."

"Similarly, analysis that mentions names or says 'no matter what everyone else is saying, we think the place is going to fall apart next week' is very sensitive," Collins said. "It's not that you're trying to cover up somebody's mistakes, it's that you cannot expect people to provide their superiors candid advice and analysis if they expect to see their views politicized and made public. "

"If Wikileaks is putting out a whole raft of embassy reporting from Moscow or State Department instructions on Russia policy this is not good news," Collins tells CNN, "because these cables almost certainly will say things that will complicate relations between and among people involved, create resentments about publication of private information and decrease the fragile confidence that has been building between the two governments. It could also reveal strategies or intentions to the detriment of our diplomatic strategy and tactics on a number of issues. And it can simply make life very difficult for embassy officers and other officials working to conduct our relations with Russia, depending on how all of this is released."

In Baghdad, the U.S. ambassador to Iraq told a group of journalists Friday that diplomats "are worried about additional documents coming out."

Ambassador James Jeffrey said, "WikiLeaks are an absolutely awful impediment to my business, which is to be able to have discussions in confidence with people. I do not understand the motivation for releasing these documents. They will not help; they will simply hurt our ability to do our work here."