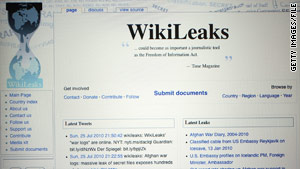 A WikiLeaks threat to publish sensitive cables has prompted a massive review of documents, a U.S. official says.
STORY HIGHLIGHTS

Washington (CNN) -- The threat of publication of thousands of sensitive diplomatic cables by a muckraker website has prompted a massive review of documents at U.S. embassies around the world, a U.S. official says.

The official, who was not authorized to comment on the record, tells CNN that the State Department has, for months, been intensively dealing with the potential impact of the release of documents that WikiLeaks just recently hinted it will publish.

The documents are believed to include hundreds of thousands, if not millions, of diplomatic reporting cables from around the world from between 2006 and 2009, the official said.

"Next release is 7 [times] the size of the Iraq War Logs," the WikiLeaks stated in a posting on its Twitter page on November 21. "Intense pressure over it for months. Keep us strong."

Why the world needs WikiLeaks

The State Department has directed every diplomatic mission in the world to analyze cables issued from their locations during that period and to highlight those cables that might contain material sensitive enough to harm the relationship with the host country or put in danger the lives of any sources of information.

The source says the concern is that the WikiLeaks release could undermine the United States all over the world.

Honest diplomatic reporting is essential, the official says, and the leaks could hurt that, as well as compromise traditional diplomatic sources. The leaks could ruin their careers or even result in their deaths.

In preparation, the State Department has been reaching out to other governments to warn them and has notified Congress about what could be published, State Department spokesman P.J. Crowley said earlier this week.

For example, David Jacobson, the U.S. ambassador to Canada, has called Foreign Minister Lawrence Cannon to inform him of the matter, said Alain Cacchione, a Canadian Department of Foreign Affairs spokesman. The Canadian Embassy in Washington is working with the U.S. State Department, he said.

The Pentagon also is concerned about the newest release. Officials there expect the documents to be released soon, possibly by the end of the week.

The agency is increasing the size of a task force assigned to comb through the records of the already-leaked documents regarding the wars in Afghanistan and Iraq. If the new documents are published as threatened, the Pentagon team will help assess how damaging they are to U.S. interests. The task force numbers more than 100 people, including staffers from other agencies.

The military has charged Pfc. Bradley Manning with leaking videos to WikiLeaks, as well as downloading documents from military computers while he served as an intelligence analyst in Iraq. Among the documents he is alleged to have taken are 150,000 diplomatic cables. WikiLeaks has denied being in possession of those cables.

Manning is being held at a military jail in Quantico, Virginia.