Final launch for shuttle Discovery delayed until at least December 17 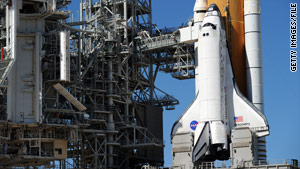 The voyage is expected to be the last for Discovery as NASA prepares to retire the shuttle fleet.
STORY HIGHLIGHTS
RELATED TOPICS

Houston, Texas (CNN) -- The final flight of the space shuttle Discovery, which has been delayed several times because of bad weather, gas leaks and electrical glitches, is now tentatively scheduled to take place December 17, according to NASA officials.

The announcement came during a Wednesday news conference at the agency's Johnson Space Center in Houston, Texas.

Officials cautioned that the shuttle's departure could be further delayed until January or February, pending the results of an ongoing investigation of what caused cracks in the shuttle's external fuel tank. Investigators have yet to determine whether the cracks occurred during assembly and, if so, why they were not discovered until the shuttle reached the launch pad.

"We want to make sure we understand the problem until we go fly," said John Shannon, NASA's Space Shuttle Program manager.

The discovery of the cracks prompted NASA to postpone a previously scheduled November 5 launch of Discovery until December 3, and officials said the schedule now has shifted to mid-December.

"It's really clear to me that the team has identified all of the different areas we need to work through to identify what our risk exposure is," Shannon said. "It's clear we're not ready for the December 3-to-7 window that's coming up," Shannon said. "We're going to leave the option open for the next launch window, which starts December 17."

The voyage is expected to be the last for Discovery as NASA prepares to retire the shuttle fleet.