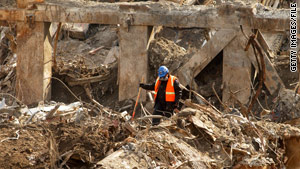 New York (CNN) -- A settlement in New York City will pay out hundreds of millions of dollars to ground zero workers exposed to toxic debris after the September 11, 2001, terrorist attacks, lawyers said Friday.

Plaintiffs narrowly approved the deal after facing a Tuesday night deadline that required 95 percent of some 10,000 people who worked at ground zero to approve the measure, according to Marc Berns, an attorney for the plaintiffs.

In March, U.S. District Court Judge Alvin Hellerstein rejected an earlier settlement, saying that it did not do enough to address the workers' ailments.

Friday's agreement concludes a seven-year fight between the city and first responders, who have said they were not properly outfitted for rescue and cleanup efforts after the 9/11 attacks, leaving them exposed to toxic dust that later prompted respiratory health issues.

The deal paves the way for at least $625 million in city payouts.

"It's a fantastic deal for everybody," Berns said. "Is it perfect? No. Is there a perfect deal? No. But this is as good a deal as you're going to get."

"There's too much risk and no guarantees," and he rejected the settlement because he did not trust how the funds were going to be allocated, he said.

Kenny Specht, a former firefighter suffering from thyroid cancer, said he signed on to the settlement to avoid continued litigation.

"I supported the settlement because it was the only game in town," he said. "What you're being offered is not everything you deserve, but your case won't get dismissed."

New York City Mayor Michael Bloomberg called the deal "a fair and just resolution of these claims, protecting those who came to the aid of this city when we needed it most."

"We will continue our commitment to treatment and monitoring of those who were present at ground zero," Bloomberg said on Friday.

"The agreement reached today on the 9/11 settlement is a positive step for many ailing first responders -- but the problem isn't over," New York Reps. Jerrold Nadler, Peter King and Carolyn Maloney said in a joint statement. "Nearly everyone agrees that the settlement does not provide adequate funding to fully compensate those who are injured among the more than 10,500 plaintiffs in this case, nor does it cover the tens of thousands of 9/11 responders and survivors who are injured but have not filed lawsuits."

New Jersey Sen. Frank Lautenberg praised the deal, pledging to "continue working to pass the James Zadroga 9/11 health bill in the Senate to create a long-term solution that meets our responsibility to the heroes of September 11th."

Those who signed onto Friday's settlement would still be eligible for the James Zadroga 9/11 Health and Compensation Act.

If passed, the bill would provide $7.4 billion in aid and medical coverage for 9/11 workers and survivors exposed to toxic substances after the World Trade Center attacks.

The House approved the measure on a mostly partisan 268-160 vote in September.

Earlier this week, Bloomberg and state lawmakers called on the U.S. Senate to pass the bill.