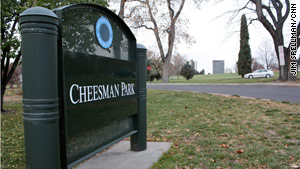 Denver's Cheesman Park was built on a 19th-century cemetery. Up to 2,000 bodies are believed buried there.

But beneath Cheesman Park lies an eerie history, unearthed from time to time by city workers.

Last month, workers digging a new irrigation system uncovered four well-preserved skeletons buried in a 19th-century cemetery upon which the park was built.

In the late 1800s, Mount Prospect Cemetery was converted into a public park, but as many as 2,000 bodies were never removed, according to Jill McGranahan of Denver Parks and Recreation.

"Many of the bodies left in Prospect Cemetery were those of paupers and criminals," McGranahan said. "Unfortunately, there is no way of knowing or even finding out who they are or if they have existing relatives."

Every few years workers stumble across skeletal remains, which then are sent to the medical examiner to be sure they are what locals call the "longtime residents" of Cheesman Park and not part of a more recent crime scene.

The remains then are reburied in a different cemetery. Before taking on a job, contractors receive warnings about the creepy hazards that dot the park.

"We told them of Cheesman's past and that coming upon skeletons was a real possibility," McGranahan said.

"They all agree that it was still unsettling the first time. As one of our workers stated, he arrives after the sun is up and leaves before it goes down so he doesn't take any chances."

So how did all these bodies end up left behind when they converted the cemetery to a city park? Local historian and author Phil Goodstein said the problem can be traced back to corrupt government contracting.

In 1893, the city of Denver hired a politically connected local undertaker named Edward McGovern, according to Goodstein.

The city agreed to pay him $1.90 "a head" to relocate the graves. McGovern soon found the work to be difficult and more importantly unprofitable, Goodstein said.

Before long, he figured out he could get paid up to four times for a single body.

"They used small coffins that were approximately one-foot high, two foot wide, and three foot long," Goodstein wrote in his book "The Ghosts of Denver."

"His 18 employees were instructed to fill one coffin with a skull, another with an arm or a leg, a third with chest bones, and possibly a fourth with dirt and rock."

A few months later, well before the job was completed, the city fired McGovern, called it a day and built the park, according to Goodstein.

"The only thing that surprises me is they haven't found more bodies," he said.

Stephen Leonard, a professor at Metropolitan State College of Denver, has studied the history of the park and the bodies left behind. He said he thinks there may have been other reasons for leaving bodies undisturbed.

"Research I've done indicates that probably at least some of the bodies that were left were of smallpox victims," Leonard said. "Evidently they did not want to disturb them for fear of disease. They just learned to live with it."

It's no surprise, given what lies beneath the park, that many said they think it's haunted.

"Cheesman is a beautiful park, but part of its appeal may lie in its unique history," McGranahan said. "Folklore tells of children playing, then suddenly vanishing in the park, of a beautiful woman singing, of spirits wondering lost because their headstones are gone. ...

"Whether it is true probably depends on if you believe in the paranormal, but it certainly adds to Denver's colorful history."