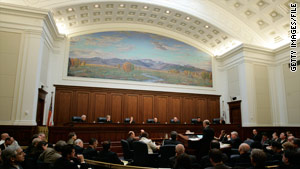 The California Supreme Court's unanimous decision reversed a ruling by the state Court of Appeals and allowed the state's higher education institutions to continue their policy of allowing certain unlawful immigrants to pay in-state rates. The lower court had ruled that such immigrants, even if they lived and studied in California, should be treated as "nonresidents" when it came to how much they paid to go to these schools.

A California state law, which took effect in January 2002, said those "without lawful immigration status" -- if they qualify on other grounds -- can get in-state tuition rates if they have "filed an application to legalize his or her immigration status."

But the plaintiffs in the case pointed to a federal law that stated illegal immigrants cannot qualify "for any postsecondary education benefit" (in this case, lower tuition rates) if other U.S. citizens didn't get the same benefit.

In its decision, the California Supreme Court found that federal law did not trump state law in this case.

U.S. citizens from outside California, it pointed out, could receive in-state tuition as long as they attended high school in California for three or more years and either graduated from a high school or got their GED in California.

The court further stated that illegal immigrants should be treated like anyone from outside California, calling it significant that not all illegal immigrants would qualify for in-state tuition rates, just those who met the criteria.

"We conclude the exemption [from paying full, nonresident tuition rates] is not based on residence in California," the California Supreme Court decision said. "Rather, it is based on other criteria."