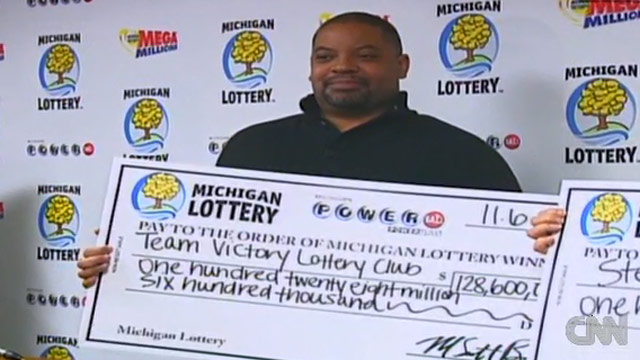 Mike Greer claimed the $128.6 million prize on Friday, on behalf of a group of southeastern Michigan residents that he dubbed "Team Victory Club." At a press conference in Lansing, Michigan, Greer wouldn't answer questions as to who purchased the ticket at Uptown Book Store in Highland Park, or why they were at the store in the first place.

Uptown Book Store, an adult novelty store a few miles north of Detroit that also rents pornographic videos, will get $50,000 from lottery officials for selling the winning ticket. It shares a building with the Deja Vu strip club.

Mays, who said he's been retired the past 10 years, said it was "to be determined" what he'd do with his jackpot. He opted for the annuity plan, spreading out his winnings over 26 years, according to CNN affiliate WILX.

Team Victory Club, on the other hand, opted for a lump sum payout of $69.6 million before taxes.

Greer said that the winners planned to give some of their money to an unnamed local church, "and maybe fix some things around the house."

"The prize is a blessing," said Greer, who did not divulge how many people would share the prize. "We were in shock. Like I told my family, everything has changed, but nothing has changed."

Friday's dual announcement marked the largest single-day payout since the Michigan Lottery began 38 years ago, and the first time that a single state lottery has had Powerball and Mega Millions winners so close together, according to the Michigan Lottery.