The men who received the iconic gold medal on a pale blue ribbon that day -- James Stockdale, George Day and Thomas Norris -- continued to make history after receiving their medals.

James Stockdale was a Navy pilot and the highest ranking prisoner of war in North Vietnam. 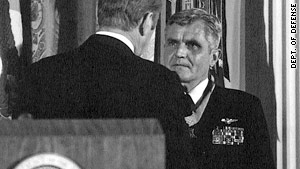 James Stockdale receives the Medal of Honor from President Ford on March 4, 1976.

"I believe I had the easiest leadership job in the world: to maintain the organization, resistance and spirit of 10 of the finest men I have ever known," Stockdale wrote later in his book "A Vietnam Experience: Ten Years of Reflection."

While in captivity, Stockdale stabbed himself in the leg to convince his captors he wouldn't talk. After that, the official medal citation says, North Vietnam eased "employment of excessive harassment and torture toward all of the prisoners of war."

Stockdale went on to become a president of the Naval War College and eventually ran for vice president with Ross Perot. Stockdale died in 2005 and is buried at the Naval Academy. 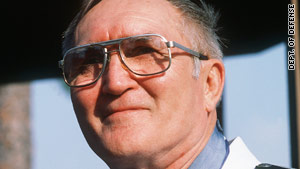 George Day received the Medal of Honor after being held as a POW in North Vietnam.

George "Bud" Day, an Air Force pilot, was held as a POW for years in North Vietnam, often in the same prison as Stockdale. Day was badly injured when he was shot down and shot later during an escape attempt. Even though he was debilitated, the North Vietnamese subjected him to frequent torture. Years later, during an online chat with viewers of PBS, Day described what his ordeal in the hands of North Vietnamese captors was like.

"They would punish you. They would rope you up or beat you up or torture you in some fashion until you made a response of some kind," Day wrote. "If someone has unrestricted torture ability, there's a lot they can do. They hung people. Stretched your arms out. Broke people's arms. Our population had a 40 percent injury rate. Broken arms. Broken backs. They were a fragile group who could be exploited with a great deal of physical pain. They did that."

According to Day's Medal of Honor citation, his refusal to talk to his captors protected other pilots. "His personal bravery in the face of deadly enemy pressure was significant in saving the lives of fellow aviators who were still flying against the enemy."

Day later became a member of the Swift Boat Veterans for Truth, a political group opposed to Sen. John Kerry's presidential candidacy in 2004. He was also an outspoken supporter of Sen. John McCain's 2008 presidential run. Day lives in Florida. 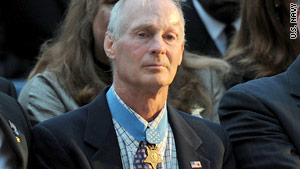 After receiving the Medal of Honor, Thomas Norris became a member of the FBI's Hostage Rescue Team.

Thomas Norris was a Navy SEAL. Norris volunteered to go more than a mile into enemy territory to rescue Lt. Col. Iceal "Gene" Hambleton, a captured pilot who had valuable information about U.S. missiles and targets that his captors, the North Vietnamese, would want to learn. Norris later learned that 30,000 North Vietnamese and Viet Cong fighters were combing the area for him.

"I was almost constantly in a position where I could have been killed," Norris told the Washington Post in 1976. "The fact that the danger is there is something you don't even worry about."

Norris' rescue of Hambleton is the inspiration for the book and movie "Bat*21. "

In spite of losing an eye in a later SEAL mission in Vietnam, Norris became an original member of the FBI's elite Hostage Rescue Team.

All three were alive when President Ford presented them with the Medal of Honor. Ford awarded a fourth Medal of Honor that day. It was a posthumous medal to U.S. Air Force Captain Lance Sijan, another pilot who endured repeated torture without divulging any information to the North Vietnamese.

There have been other living Medal of Honor recipients in the years since 1976, but those were retroactive awards. Because of racism during past wars, or because more information about heroics comes to light, the Department of Defense reinvestigates a service member's actions and decides he deserves a Medal of Honor.

The latest recipient, Giunta, will receive the award three years after his heroics. He was recommended for a Medal of Honor hours after a bloody ambush and firefight in eastern Afghanistan in 2007. It has taken until now for the medal to be approved.

Another Medal of Honor may be awarded relatively soon. CNN has learned that a young Marine from Kentucky, Dakota Meyer, has been recommended for a Medal of Honor for heroics in September 2009 in Afghanistan's Kunar province. His case is now being considered at the highest levels of the Pentagon.