Science figures out how cats drink 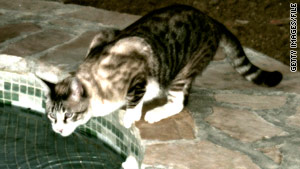 When cats drink, the top surface of their tongues touches the liquid first.
STORY HIGHLIGHTS

(CNN) -- While dogs slurp to alleviate thirst, cats display a mastery of physical dynamics that leaves their whiskers, chin and the counter top free of liquid, researchers found.

Researchers spent hours watching a feline consume liquids in order to understand the forces. They also made a robotic version of a cat's tongue and watched YouTube videos of big cats drinking.

Using complicated formulas, the four-member team from Virginia Tech, the Massachusetts Institute of Technology and Princeton University came up with their findings, detailed Thursday in the online journal Science.

Here's how a house cat, which averages about four laps per second, personifies daintiness while drinking.

Cats extend their tongues straight down with the tip curled backward like a capital "J" to form a ladle, so that the top surface of the tongue touches the liquid first.

"The speed of the tongue is quite incredible," co-author Pedro M. Reis, an assistant engineering professor at MIT, told CNN.

"The smooth tip of the tongue barely brushes the surface of the liquid before the cat rapidly draws its tongue back up," said the researchers, who received no funding for the study.

"As it does so, a column of milk forms between the moving tongue and the liquid's surface. The cat then closes its mouth, pinching off the top of the column for a nice drink, while keeping its chin dry."

That column, they say, is a balance between gravity, which pulls the milk back toward the bowl, and inertia, which refers to the tendency of a liquid to continue moving in a direction unless another force interferes.

Kitty knows how quickly to lap in order to balance these forces, according to the study, which drew on mathematics, fluid mechanics, physics and engineering.

"This suggests that cats are smarter than many people think, at least when it comes to hydrodynamics," writes co-author Jeffrey M. Aristoff of Princeton.

Unlike humans, who can seal their cheeks to suck in liquids, dogs and cats rely on lapping, Reis said.

A dog's tongue in effect forms a little cup to scoop up water.

"Cats are far more complex," Reis said. Their tongues don't pierce the surface of a liquid.

Big cats don't lap as rapidly as house cats, the scientists said, in part because their tongues are larger.

"Lions and tigers [tongues] will go about half [the speed] of house cats," said Roman Stocker, an associate professor of civil and environmental engineering at MIT.

Reis and Stocker said one of the reasons they undertook the 3-year study was to apply the scientific method and rules of basic research about something scientists don't understand.

Results of the study also may have implications for soft robotics, they said.

Stocker got the idea for the study after watching his cat Cutta Cutta lap milk.

Cutta Cutta, which means "stars stars" in an Australian aboriginal language, is the subject of several videos and photos taken by the team.

Asked whether Cutta Cutta is enjoying the celebrity from the release of the study, Stocker told CNN, "I'm not sure he realizes it."