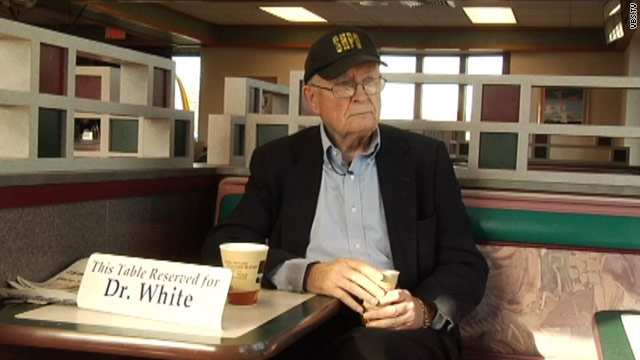 Editor's note: The staff at CNN.com has been intrigued by the journalism of VICE, an independent media company and website based in Brooklyn, New York. VBS.TV is Vice's broadband television network. The reports, which are produced solely by VICE, reflect a transparent approach to journalism, where viewers are taken along on every step of the reporting process. We believe this unique reporting approach is worthy of sharing with our CNN.com readers.

Brooklyn, New York (VBS.TV) -- Dr. Robert J. White performed his first neurosurgery at age 15 on a frog cadaver in high school biology class. Over the next 50 years, he operated on more than 10,000 brains, one of which accounted for the most ambitious neurological experiment in history: In the '70s, he successfully transplanted the head of one monkey to the body of another. For White's efforts, the monkey awoke from the anesthesia and tried to bite his finger off.

During our interview at his local McDonald's from which he worked, White described his most daring research and experimental surgery, as well as the decades of clinical time he devoted to the treatment of brain and spinal cord injuries. He published more than 1,000 articles in medical journals and had audiences with four popes in his role as adviser to the papal authority on bioethics. Although less provocative than his work in the area of organ transplantation, his documentation of the effect of deep cooling on spinal injuries greatly reduced long-term damage of the spinal cord and paralysis. This pioneering work has been suggested by some in the neuroscience field as worthy of Nobel prize consideration.

In his most controversial experiments -- more often that not involving the use of dogs and primates -- he successfully isolated the brain. As mentioned, he once transplanted the head of a monkey onto the body of another. In his estimation, this process, which he referred to as a "whole body transplant," proved that the brain is truly the repository for human consciousness.

Although the transplant remained viable for only two days before the animal died, future transplants extended the life span of the recipient. The issue of the paralysis that results from the severed spinal cord, however, was impossible to avoid and remains one of the largest areas of interest in modern medicine. As such, only people with pre-existing paralysis might benefit from this procedure.

The animal rights movement has of course decried White's work, most of which was carried out decades ago when animal testing was not as controversial. The fact remains, though, that his career in neuroscience helped save countless human lives, even if he euthanized many dogs and monkeys along the way. Sadly, White died in September, but his work has left a lasting, wide-ranging influence on conventional medicine that will ultimately be the foundation for countless future scientists.