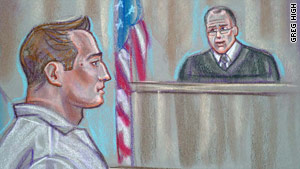 Washington (CNN) -- The arrest of a Navy SEAL accused of trying to sell arms smuggled from Iraq or Afghanistan has raised questions about how he managed to get 80 high-powered weapons into the U.S. through military transport.

The questions were buzzing Friday inside the ranks of the U.S. military after an accusation that a Navy SEAL, one of America's elite warriors, was at the center of a weapons smuggling ring.

The 18-page criminal complaint from the U.S. attorney's office in Las Vegas, Nevada, reads like a paperback thriller -- full of machine guns, cash, threats and bravado, a lot of it told to federal agents by a cooperative informant who had been facing domestic battery and robbery charges.

The AK-47 rifles are described as fresh off the battlefield, marked with the Arabic letter that signifies they were part of the Iraqi Army arsenal -- or, as one of the alleged conspirators said: "There is still Iraqi sand in this [expletive]."

The Navy SEAL is identified as Nicholas Bickle. He talked tough, according to the complaint.

"If you ever [expletive] with me you know who we are. We're the government, we'll catch you," he told one person.

The military rules are clear: Everyone gets searched before heading home from deployment. Military screeners are trained by Customs and Border Protection officials and they screen the people, the luggage, the gear and the cargo, according to Wallace.

"Our special forces members don't have special waivers for customs inspections. They're subject to all the same rules and restrictions as anyone else in uniform," said Wallace.

But the rules seem to bend a little for special operations forces.

"The regular guys go through a more robust search, but it's only a cursory search for special forces guys," one person with insider knowledge of military procedures told Pentagon Correspondent Chris Lawrence,

A special forces team might travel with far more equipment, including classified hardware, have a shorter deployment, and might arrive and leave on a far different and less formal schedule than regular troops.

Rank-and-file military get even more rigorous treatment than civilians might face in an airport line: Put the duffel on the conveyor belt, have it X-rayed, and then dump the contents out on a table and have them picked over. And then pack it up and have it X-rayed again before heading to the plane and home.

Outside, before troops get to the military screeners, there are so-called "Amnesty Boxes," a last chance for a military man or woman who might "forget" to hand in that battlefield souvenir or might have an extra live round in a pocket. They can drop items in the box with no questions asked. And the rules are strict about not bringing back weapons, apart from those assigned and supplied, which are placed in the aircraft hold.

"To bring any kind of war trophies back, you have to go through a process," Pentagon spokesman Col. Dave Lapan said Friday. Asked what might follow the arrest of Bickle, Lapan would only say, "Too soon to tell."

There are cases of troops taking unauthorized equipment from the battlefield, but almost all of those involve smuggling items home as personal souvenirs, according to the Defense official.

"This seems to go way beyond that. We have dangerous gangs operating just over that Southwest border, and here we have a SEAL arming the very guys we could be fighting," the Defense official said.

The Naval Special Warfare Command is cooperating with federal officials, but it is not conducting its own investigation into how Bickle allegedly smuggled in all the weapons as a SEAL.

"If it's determined we need to reassess procedures in place to make sure our members are not transporting items stateside, then we'll certainly do that," Wallace said.