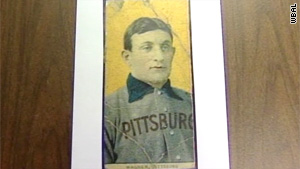 (CNN) -- Years after his death, baseball legend Honus Wagner hit a home run for a group of nuns, who will use proceeds from the sale of his extremely rare baseball card to do charitable work.

Texas-based Heritage Auctions conducted the internet auction, which concluded Thursday night with a winning bid from Doug Walton, whose family owns seven stores in the Southeast specializing in sports cards and collectibles.

"I have been in the market for this card for a long time," Walton told CNN. "It is the Mona Lisa of baseball cards."

Both the card and the account of how it came to be sold make for compelling stories.

Like other stars of the early 20th century, Wagner, a Hall of Famer with the Pittsburgh Pirates, appeared on tobacco company cards.

The T206 cards were made between 1909 and 1911. Wagner's likeness was removed, either because he opposed being associated by young fans with tobacco or because he wasn't being paid enough by the company, said Chris Ivy, director of sports sales for Heritage Auctions.

The Catholic order, which has a facility in Baltimore, Maryland, obtained the card when the brother of one its nuns died earlier this year, leaving several baseball cards to the congregation. Neither of the siblings has been identified.

Never mind that the card's sides had been trimmed to fit in a scrapbook, that it was laminated and lost some paper on the back, leaving it in poor condition. It's an authentic T206 Honus Wagner card.

"The fact that this was in her brother's collection since the 1930s and no one knew it" makes its history special, Ivy told CNN.

The Catholic missionary and teaching order said Wagner's name "is blessed to us now."

"We're very grateful to have the extra funds to help the School Sisters of Notre Dame where we minister in more than 30 countries," said Sister Virginia Muller, treasurer of the order's Atlantic-Midwest area, in a statement.

Walton, managing partner of Walton Sports Cards and Collectibles, said he's tried three previous times to buy a Wagner card, but was outbid. He plans to have the card make the rounds of the company's stores in Tennessee, Florida and South Carolina.

He concedes he paid about $60,000 more than the card is worth, but "the back story made me spend the extra money on it."

About 75 percent of his pursuit of the T206 card was emotion, he said. "I'm a very stubborn person."