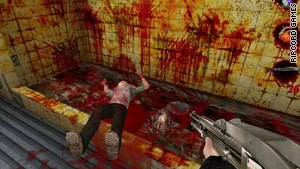 "Postal 2," here in a screenshot, is part of a debate between free speech and consumer protection at the high court.
STORY HIGHLIGHTS

Click here for a brief summary of what you need to know in order to understand these issues.

Washington (CNN) -- "Postal 2" features the adventures of the "Postal Dude," an interactive video game character who, under the control of the player, must confront everyday tasks. But it is how he handles these errands -- with the power to behead girls, shoot police, and urinate on victims -- that along with other explicit games, has become a constitutional controversy.

Now in a dramatic Supreme Court confrontation, free speech clashed with consumer protection over these so-called "violent" video games and whether they should be kept out of the hands of children.

The justices Tuesday appeared genuinely torn as they heard oral arguments in the appeal of a state law to regulate the sale of such material to minors.

Justice Antonin Scalia wondered whether the state would in effect be creating a "California Office of Censorship" to determine what is violent content.

"It would judge each of these videos one by one. That would be very nice," he said somewhat sarcastically. "Do we let government pass upon a board of censors? I don't think so."

In some games an underage player can "imagine he is a torturer and impose gratuitous, painful, excruciating violence upon small children and women -- and do this for an hour or so," said Justice Stephen Breyer. "Why isn't it common sense to say a state has the right to tell parents -- if you want that for your 13-year-old, you go buy it yourself?"

During the one-hour oral arguments, many on the high court appeared concerned the California law may have gone too far, but others suggested states might have some more narrow regulatory role when it comes to the sale of violent content.

Video game makers said the ban goes too far. They say the existing nationwide industry-imposed, voluntary ratings system is an adequate screen for parents to judge the appropriateness of computer games.

At issue is how far constitutional protections of free speech and expression, as well as due process, can be applied to youngsters. Critics of the content-based restrictions say the government would in effect be engaged in the censorship business, using "community standards" to evaluate artistic and commercial content.

A federal appeals court in San Francisco, California, last year tossed out the law before it took effect, after Gov. Arnold Schwarzenegger signed it in 2005. He had applauded the high court's decision to intervene. "We have a responsibility to our kids and our communities to protect against the effects of games that depict ultra-violent actions, just as we already do with movies," the governor said. The onetime actor made his name playing characters engaged in similarly violent acts in such movies as "Terminator."

The legislation was designed to strengthen the current industry-controlled rating system, and would have placed an outright ban on the sale or rental of games deemed excessively "violent" to those under 18. As defined by California, such interactive games are those in which the player is given the choice of "killing, maiming, dismembering or sexually assaulting an image of a human being" in offensive ways. It also defined such games that would "appeal to a deviant or morbid interest of children and are patently offensive to prevailing community standards."

Retailers would face up to $1,000 fine for violations. The law would also require game makers and retailers to place an "18" label prominently on excessively violent games.

During the one-hour oral arguments, many on the high court appeared concerned that California may have gone too far, but others suggested states might have some more narrow regulatory role when it comes to violent content.

"What's next after violence? Drinking? Smoking? Movies that show smoking can't be shown to children?" asked Scalia. "Are we to sit day-by-day to decide what else will be made an exception from the First Amendment?"

"Why are video games special? Or does your principle extend to all deviant, violent material in whatever form?" Justice Ruth Bader Ginsburg asked the lawyer from the state attorney general's office.

Zackery Morazzini replied that the "interactive nature"-- where players actually control the action -- makes them different from more "passive" entertainment like movies or books.

The justices offered various hypotheticals, and mused whether specific types of "artistic" content could be regulated. They included fairy tales from the Brothers Grimm -- which Scalia said "were quite grim" and rap music -- which Justice Sonia Sotomayor labeled as "original violent songs that have been sung about killing people and about other violence directed to them."

The state had submitted a short video game excerpt to the court as part of its briefing material. "I'm not suggesting that I like this video," said Sotomayor. "To me, it's not entertaining, but that's not the point. To some it may well be."

Morazzini tried to argue that video-game violence belonged in the same category as pornography -- the only other free speech and expression area which the high court has said can be strictly controlled when it comes to minors.

"Sex and violence have both been around a long time, but there is a societal consensus about what's offensive for sexual material and there are judicial discussions on it," said Justice Anthony Kennedy. "But you are asking us to go into an entirely new area where there is no consensus, no judicial opinions. And this indicates to me the [California] statute might be vague."

On the other side, several on the bench were clearly disturbed at the content of some games rated "M" -- meaning they're intended for mature players only.

Breyer and Justice Samuel Alito also pointed to studies showing showing children who repeatedly watch on-screen games can become more aggressive, anti-social, and less able to distinguish the consequences of violence in real life. Parents groups and some lawmakers believe there is a "causal connection" between access to such games and psychological or other harm to children.

"You seem to argue that there really is no good reason to think that exposure to really violent video games is bad to minors," Alito said to the industry's lawyer. "We have here a new media that cannot possibly have been envisioned at the time when the First Amendment was ratified."

Attorney Paul Smith was repeatedly pressed by Alito and Roberts over whether any law regulating the sale of video games to children would be constitutional. He flatly said no, and cited other scientific studies showing no correlation in future acts of violence by youngsters playing video games.

Several justices suggested that keeping violent video games on the top shelves of stores, or confined to an adults-only room, might be appropriate state intervention. Sotomayor cited one study finding as many as 20 percent of these kinds of games were being sold to minors.

"Postal 2" was specifically cited by the state as potentially subject to the proposed statutory ban. The manufacturer, Running With Scissors, Inc., based in Tucson, Arizona, rates it as "M" for a mature audience only, with "blood and gore," "intense violence" and "sexual themes" as part of its content.

Other games listed by parent groups as being of concern are "Full Spectrum Warrior" and "Call of Duty: Modern Warfare 2," where players at one level can view terrorists slaughtering civilians at an airport.

The video game industry, as part of its appeal, sent several PlayStation video games to the justices for their discretion to view, including "Medal of Honor" and "Resident Evil 4."

The motion picture industry has its own self-monitoring ratings system, imposed decades ago after complaints that some films were too explicit for the general audience in what was seen and heard. The gaming industry says its ratings system roughly follows the same self-imposed guidelines, and ratings are clearly labeled on the packaging.

Similar complaints have been raised over the decades over children's exposure to pulp novels and comic books, in addition to pornography.

Efforts in at least eight other states to restrict gaming content have been rejected by various courts. Video game makers have the support of various free-speech, entertainment, and media organizations. Nine states also agree, noting California's law has good intentions but would compel law enforcement to become "culture critics" and "distract from the task of policing actual violence."

But 11 other states back California, saying they have enjoyed a traditional regulatory power over commerce aimed at protecting children, including such goods as alcohol and cigarettes.

The Supreme Court in recent years has thwarted repeated congressional attempts to protect children from internet pornography, saying legislation went too far in limiting adult access to lawful, but explicit, sexual content on the web.

And the justices this spring threw out a federal law limiting the sale of graphic videos of animal cruelty.

The case is Schwarzenegger v/ Entertainment Merchants Assn. (08-1448). A ruling is expected by next spring.