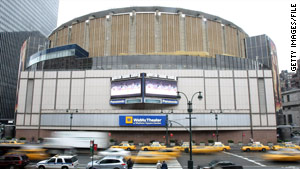 New York (CNN) -- An asbestos scare at New York's Madison Square Garden has forced the postponement of Tuesday night's Knicks basketball game, according to a statement released by the team.

"We will be working with the city and independent experts, ATC Associates and GCI Environmental Advisory to evaluate and determine the most appropriate course of action," the statement said. "As the safety of our customers and employees are our top priority, we will not reopen the Garden until we are absolutely assured the arena is safe."

The scare was triggered sometime after Monday night's Rangers hockey game when, during overnight maintenance, "which included cleaning asbestos-related materials in the attic above the ceiling, some debris fell into the arena," the statement said.

The Knicks were scheduled to play the Orlando Magic. Ticket holders have been told to keep their tickets and check the team's website for information about future events.