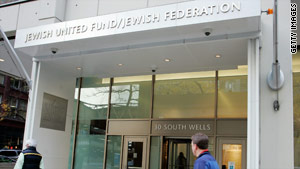 Chicago, Illinois (CNN) -- Synagogues across metropolitan Chicago, Illinois, began taking "appropriate precautions" Friday after a warning by security officials to watch out for suspicious packages from abroad, according to a Jewish Federation spokeswoman.

While there were "no identifiable or specific threats," an FBI official in Chicago said suspicious packages addressed to U.S. destinations found on cargo planes abroad warranted the precautions.

"Since two of the suspicious packages that were intercepted were addressed to religious institutions in Chicago, all churches, synagogues and mosques in the Chicago area should be vigilant for any unsolicited or unexpected packages, especially those originating from overseas locations," said FBI Special Agent Ross Rice.

The Jewish Federation of Metropolitan Chicago was contacted by federal officials Friday morning to urge the organization to be on alert for suspicious packages, spokeswoman Linda Haase said.

"We are taking appropriate precautions, and we are advising local synagogues to do the same," Haase said.

The Anti-Defamation League said it alerted synagogues across the United States to increase mailroom security after federal security officials informed the organization of "a reported threat to Jewish institutions in the form of packages mailed from overseas, particularly Great Britain, Yemen and Saudi Arabia."

Haase said she had not heard reports of Chicago congregations altering plans for services on Friday evening, the beginning of the Jewish Sabbath.

"We generally pay careful attention to packages coming to the synagogue, accepting only those we're expecting or from a known sender," Steven Bob, the rabbi at a synagogue in the western Chicago suburbs. "Today we were extra careful."

Bob said that there was plenty of email and phone traffic among Chicago Jewish leaders responding to news of the plot on Friday but that he didn't think worshippers would be deterred from Friday services.

"We live in a world that contains some people that are hostile to us and we want to respond to that hostility with caution," said Bob, who leads Etz Chaim in Lombard, Illinois. "At the same time, we're not going to go hide in the basement."

"I may say a word or two about this tonight, but I don't think it's worthy of a sermon," he said Friday. "What am I going to say, that I'm opposed to terrorism?"

Lucille Price, a receptionist at Anshe Emet Synagogue, said Chicago police made them aware of the reports and asked them to keep an eye out for suspicious packages among any deliveries that arrived Friday.

Rabbi Marvin Hier of the Simon Wiesenthal Center in Los Angeles, California, said that if synagogues were indeed the intended recipients of the packages, "this is just another indication of the dangerous world we live in where Jews are the principal target."

But congregation leaders at two prominent Chicago synagogues, Temple Sholom and Chicago Sinai Congregation, said they were not made aware of any attempts to ship bombs or hazardous material to them.