Man charged in D.C.-area bomb plot had 'an associate'

From the CNN WIre Staff 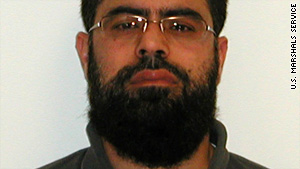 Washington (CNN) -- A search warrant revealed new details Thursday about an alleged plot by Virginia man to help others he thought were members of al Qaeda in planning multiple bombings at Metrorail stations in the Washington area.

A warrant included a sworn statement by an FBI agent that said Farooque Ahmed was accompanied by "an associate" as he visited several Metrorail stations to record video he later handed over to undercover agents he thought were al Qaeda members.

The warrant, which sought to seize Ahmed's personal bank account, his car and other evidence at his Arlington, Virginia, home, did not reveal the associate's identity. A source familiar with the case said he does not anticipate anyone else being arrested in connection with this case.

The FBI agent's affidavit attached to the search warrant application said "Ahmed and an associate were inquiring about making contact with a terrorist organization in order to participate in jihad by traveling overseas to fight coalition forces in Afghanistan and/or Pakistan."

Ahmed, 34, appeared briefly Wednesday before federal Magistrate John Anderson at the U.S. District Court in Alexandria, Virginia. The court will appoint an attorney for Ahmed, and he was ordered to remain in custody until a detention hearing Friday, said Peter Carr, a spokesman for the U.S. attorney's office in Alexandria.

A federal grand jury returned a three-count indictment against Ahmed on Tuesday, the Justice Department said in a statement.

"In announcing this arrest, officials emphasized that at no time was the public in danger during this investigation and that the FBI was aware of Ahmed's activities from before the alleged attempt began and closely monitored his activities until his arrest," the statement said.

"The public should be assured that there was no threat against Metrorail or the general public in the Washington, D.C., area."

Metrorail is the name of the subway system that serves the greater Washington area, including suburbs in northern Virginia and south-central Maryland.

Ahmed is charged with attempting to provide material support to a designated terrorist organization, collecting information to assist in planning a terrorist attack on a transit facility and attempting to provide material support "to help carry out multiple bombings to cause mass casualties" at the Washington-area stations, authorities said. If convicted, he faces a maximum sentence of 50 years in prison.

An administration official said Wednesday that Ahmed has no known connections to any overseas terrorist groups or individuals. The investigation is continuing, the official said on condition of not being identified.

White House press secretary Robert Gibbs told reporters the arrest is "another important example" of work by the FBI, all levels of law enforcement and the national security team "to keep our country safe."

"At no point was the public in any danger," Gibbs said.

In a statement, the Washington Metropolitan Area Transit Authority said, "This arrest reinforces the need for continued vigilance by Metro and its customers."

Carr said Ahmed was dressed in casual clothes and had a long beard at the court appearance, where he appeared reserved and "addressed the judge respectfully."

Ahmed was arrested at 9:40 a.m. Wednesday at a hotel in Herndon, Virginia, according to Carr.

Ahmed attempted to assist others "whom he believed to be members of al Qaeda" from April through Monday in planning multiple bombings at the stations, according to the indictment.

Federal authorities declined to provide further information on the identities of the purported al Qaeda members who allegedly were in contact with Ahmed.

On April 18, Ahmed allegedly drove to a hotel in Dulles, Virginia, and met with a courier who he thought was affiliated with a terrorist organization, the indictment said. That person "provided Ahmed with a document that provided potential locations at which future meetings could be arranged," the Justice Department said, citing the indictment.

On May 15, Ahmed allegedly agreed to "watch and photograph" a Washington hotel as well as a Metrorail station in Arlington, Virginia, "to obtain information about their security and busiest periods," the department said.

Ahmed, a naturalized U.S. citizen who was born in Pakistan, "allegedly participated in surveillance and recorded video images of Metrorail stations in Arlington, Virginia, on four occasions," the statement said.

On or about July 19, in a Sterling, Virginia, hotel room, Ahmed allegedly gave a memory stick containing video images of the station to "an individual whom Ahmed believed to be affiliated with al Qaeda," according to the indictment. That same day, he allegedly agreed to assess the security of two other Metrorail stations in Arlington as possible locations of terrorist attacks, the Justice Department statement said.

And in a Herndon hotel room on September 28, Ahmed allegedly handed over a USB drive containing images of two Arlington Metrorail stations to a person he thought was affiliated with al Qaeda, authorities said. He also allegedly provided diagrams he drew of three Arlington Metrorail stations and provided suggestions as to where explosives should be placed on trains at the stations "to kill the most people" in simultaneous attacks planned for 2011, the Justice Department said.

"Today's case underscores the need for continued vigilance against terrorist threats and demonstrates how the government can neutralize such threats before they come to fruition," said David Kris, assistant attorney general for national security.

"Farooque Ahmed is accused of plotting with individuals he believed were terrorists to bomb our transit system, but a coordinated law enforcement and intelligence effort was able to thwart his plans."