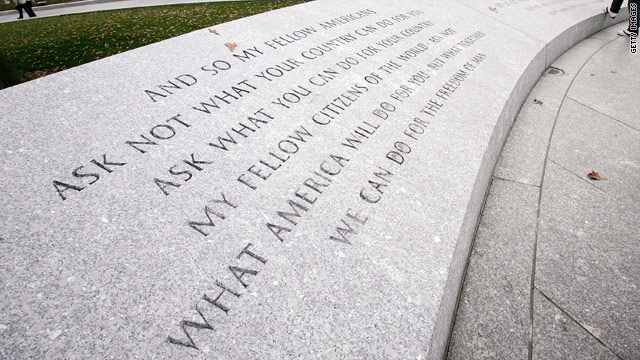 Washington (CNN) -- The message from President John F. Kennedy's January 20, 1961, inaugural address has withstood the test of time, but not the elements at his grave site at Arlington National Cemetery.

To remedy that, workers Thursday began to restore the legibility of the inscription on a granite wall near Kennedy's tomb.

Generations of Americans and international visitors have thronged to Kennedy's grave and eternal flame, which lie on the slope beneath the Custis-Lee Mansion.

Words from other Kennedy speeches also are on the wall, which was erected in 1965. The original engraving was done by master stone mason John Everett Benson, who was on hand Thursday to advise workers.

The work will take about a week and will cost less than $10,000, said Knights spokesman Patrick Korten.

The group noticed the weathering in August after members walked to the site after a wreath-laying ceremony at the Tomb of the Unknowns.

"We all looked at the wall and we could not read it," said Korten.

The organization also is sponsoring a high school essay contest to mark the 50th anniversary of Kennedy's inaugural address.