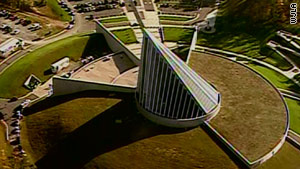 Shots were fired a second time at National Museum of the Marine Corps, the FBI said Friday.

Washington (CNN) -- The same weapon was used in three recent incidents of shots fired at military buildings, including the Pentagon, the FBI said.

Tests at the FBI Laboratory showed that the Tuesday night shooting at a vacant Marine Corps Recruiting Station in Chantilly, Virginia, involved the same weapon as earlier similar incidents at the Pentagon and the National Museum of the Marine Corps, an FBI statement said.

On Friday, the FBI said that more shots were fired overnight at the National Museum of the Marine Corps building in Triangle, Virginia.

No one was injured in any of the earlier shooting incidents, which all involved shots fired into the buildings during overnight hours.

The FBI Washington field office's Joint Terrorism Task Force is leading an investigation of the shootings.