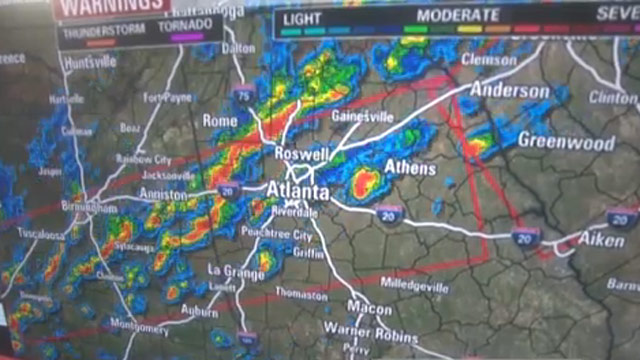 Are you in the path of the storms? Share your photos, videos and stories with CNN iReport.

(CNN) -- A system that was pushing ferocious storm cells in a track from Mississippi to the mid-Atlantic states brought reports of tornado sightings and delays at several large airports on Wednesday.

Tornadoes had been reported Wednesday in North Carolina, Virginia and Maryland, the National Weather Service said, though it had not yet confirmed the sightings.

Tornado watches were in effect Wednesday afternoon in arc extending from Mississippi to New Jersey.

Local authorities have not received reports of injuries or calls for rescue, but fire crews and EMS workers are combing the area for victims, she said.

In Henrico County in southeastern Virginia, a dispatcher said that trees and power lines were felled Wednesday and that there was a widespread power outage.

Planes into New York's John F. Kennedy International Airport were delayed an average of two hours and 39 minutes, according to the FAA.

The system, which spawned at least 26 possible tornadoes Tuesday, brought snow and high winds across the Midwest.

Wind advisories were posted across the Upper Midwest and sections of the Ohio Valley. Winter storm warnings -- with the promise of snow -- were in effect in North Dakota and Minnesota.

"It's a very strong storm system that moved in," Pearl said. "It's definitely been causing a major disruption."

Wednesday was a day of cleanup for many communities in North Carolina, Alabama, Tennessee, Indiana, Wisconsin and Illinois. In addition to the tornadoes, some places recorded wind gusts exceeding 70 mph. The National Weather Service's Storm Prediction Center said there were 268 reports of wind damage Tuesday.

High winds canceled hundreds of flights Tuesday -- more than 500 at Chicago's O'Hare International Airport alone -- along with dozens more in Minnesota. The Minneapolis-St. Paul airport reduced air traffic from three runways to one for landings and takeoffs Tuesday because of high winds.

Extensive damage from the high winds, tornadoes and possible tornadoes was reported from New York and Wisconsin to the Gulf Coast, but it was most heavily concentrated in Indiana, Ohio and Kentucky.

Six tornadoes were confirmed in Indiana, three in Ohio and one each in Virginia, Wisconsin and Kentucky.

In Lincoln County, North Carolina, five homes were damaged and three destroyed by a possible tornado, spokesman Dion Burleson said late Tuesday. Eleven people were hurt -- one with life-threatening injuries. Storms brought down trees, which took power lines with them, knocking out electricity for hundreds of residents.

Ten to 15 homes were damaged near the town of Geraldine in DeKalb County, Alabama, said Lauree Ashcom, spokeswoman for the Alabama Emergency Management Agency.

He turned to another employee after spying an odd cloud formation outside the business door. "'Does that look like a tornado?' I asked. As soon as I said that, it touched down."

The twister tore a roof off a pole barn, damaged some reconditioned recycling equipment and employees' cars. No one was hurt. The 10 employees "all ran for [heavy] equipment and got inside," Hill said.