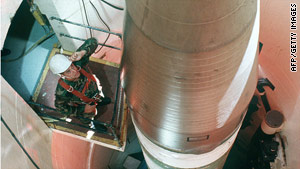 Washington (CNN) -- A malfunctioning launch control center for a portion of the nation's nuclear missiles remained offline Wednesday as investigations continued into a weekend computer problem that disrupted communications with more than 10 percent of America's land-based nuclear missiles.

Early indications are that Saturday's disruption to one of the launch control centers linked to Warren Air Force Base in Wyoming lasted longer than an hour, Lt. Col. John Thomas said. The problem appears to be very similar to glitches at two other nuclear missile sites in the late 1990s.

The United States has 450 land-based intercontinental ballistic missiles in its nuclear arsenal. The 50 Minuteman III missiles involved in Saturday's incident are all currently at "normal operating capability," said Thomas, the director of public affairs for the Air Force's Global Strike Command. But while those missiles are typically controlled by five underground launch control centers, only four are currently online, he added.

The fifth control center remains offline and is believed to be the source of a computer hardware problem that caused a communications disruption Saturday. It has been electronically isolated from the launch system while the problem is investigated and solved, Thomas said.

It's not unusual for a missile squadron to take one of its five launch control centers out of service to perform maintenance, Thomas explained. In fact, he said, an entire squadron of missiles can be controlled by just one control center or even from a command aircraft flying nearby.

Thomas said that as soon as computer messages started telling the squadron commanders at Warren Air Force Base that a problem existed over the weekend, closed-circuit television security cameras were used to check each silo and make sure no obvious problems existed. Then, Air Force personnel from Warren were sent to all 50 silos, in a "not insignificant effort," to visually inspect them and make sure they were secure. Some of the missile silos are hundreds of miles from the base.

The investigation is still going on, Thomas said, but early indications are that a computer component on the fifth launch control center continually tried to communicate with the missiles in the silos when it wasn't supposed to. He compared it to five people with walkie-talkies and one of them sitting on the button, making it impossible for the other four to use theirs.

Once the fifth launch control center was isolated, the other four established communications with all 50 missiles, and the squadron was back to normal, Thomas explained. The process of isolating the problem and getting the other control centers linked back to the missiles took more than an hour, he said. Because of redundancies in the nuclear force, several military officials have said, the president always had the ability to order the missiles to launch.

As for the cause, Thomas said it appears the computer hardware problem is very similar to problems in the late 1990s at the two other Air Force bases that control America's intercontinental ballistic missile forces: Minot Air Force Base in North Dakota and Malstrom Air Force Base in Montana. The circumstances of those incidents were much like what happened at the Warren base, he said.

The Air Force and Strategic Command, which would take charge of the missiles if the president were ready to launch them, is investigating the incident. Thomas said that right now, investigators are "not ruling anything out." But he said there is "no indication of intentional of malicious activity."