Trial of 'ninjas' accused of killing Florida couple to begin 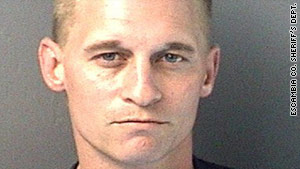 Dressed as ninjas and wearing black masks, Leonard Gonzalez Jr. and seven others allegedly crept into the home of the couple on July 9, 2009.

Prosecutors accuse Gonzalez Jr. of shooting and killing Melanie and Byrd Billings while one of the couple's special-needs children looked on.

If convicted Gonzalez, 35, faces the death penalty in Pensacola, Florida.

The gang of "ninjas" allegedly entered the home with hopes of stealing the family's home safe, which they believed contained upwards of $13 million.

The Billingses cared for 13 special needs kids, nine of whom were home at the time.

A small safe containing prescription medication, family documents and some jewelry was taken, and later found in the backyard of a woman who said she was a friend of Gonzalez, authorities have said.

Two sources familiar with the investigation told CNN that a second safe at the home contained at least $100,000.

Of the eight people arrested in the case, seven males are facing murder charges and home invasion robbery. One woman is accused of being an accessory after the fact.

The seven males, including a 16-year-old charged as an adult, have pleaded not guilty to the charges.

A nurse who works with special-needs children interviewed the boy, who has autism and speech issues, regarding the deaths of the Billingses.

The nurse told police that the child said "two bad men" were wearing black masks when they knocked on the door. They woke Byrd Billings and said, "You're going to die."

Escambia County Sheriff David Morgan has said Gonzalez once worked for a car dealership Byrd Billings owned, and court documents state that Gonzalez received financial support from the family for a martial-arts studio that he ran.

An attorney representing the Billingses has said that Byrd Billings made a nominal donation to Gonzalez's karate charity.

The child, whose age was not given, said one of the men counted to three "before he shot mom and dad," and his father kept screaming, "No way, no way."

Byrd Billings grabbed the back of one man's neck and struggled with him before he was shot, the child said. The boy said Melanie Billings "got shot in her shirt."

Another child told the same nurse he was upstairs in bed and stayed in his room when he heard the knock on the door. The second boy recalled hearing "seven booms" and crept into the hallway. He heard Melanie Billings scream, he said, but stayed upstairs until police arrived.

It was unclear from the interviews whether the men knocked on the bedroom door or the front door of the home.

The children's accounts were contained in hundreds of pages of documents released by the state attorney's office as part of the pretrial discovery process.

Also in the documents is a police interview with Gonzalez, who told authorities in a July 22, 2009, interview that a group of car dealers did not like Byrd Billings and had gotten together to discuss this.

Used car dealer Henry "Cab" Tice came to him, Gonzalez said, and told him the group wanted Billings killed, but he refused to do it.

Another son of Billings told police that a man named "Cab" had "double-crossed" his father and that the son was present when the two men argued.