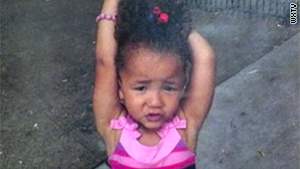 Hailey Rodriguez's mother had brought her to the clinic for treatment of a skin rash.
STORY HIGHLIGHTS

New York (CNN) -- A girl taken to a clinic for a skin rash had to be treated with a drug cocktail to prevent HIV and hepatitis after she was accidentally pricked by contaminated needles on the floor, according to the attorney for the family.

Hailey Rodriguez, who turned 3 on Monday, is sick from the side effects of the drug cocktail she was given by Montefiore Medical Center after the ordeal, Susan Karten, Maklad's attorney told CNN.

Nadia Maklad took her daughter to the Montefiore Medical Pavilion in the Bronx on October 7 because Hailey had a minor skin rash. Maklad was talking to the doctor in the examination room when she heard her daughter screaming and crying.

"I asked her what happened. She lifted up her dress, her stomach was bleeding and her hand was bleeding. She pointed to a bin: it was a red bio hazard bin on the floor," Maklad told CNN. "The top wasn't securely on, the opening where you put the needles was broken, the bin was full of uncapped dirty needles."

Steve Osborne, a spokesman for Montefiore, told CNN, "We've been consulting with the family regarding the incident, and working with them to see that appropriate care is provided."

"How this could happen at an institution like Montefiore is beyond me," Susan Karten, Maklad's attorney told CNN.

Rodriguez is at risk for HIV infecton and hepatitis; she is taking the drug cocktail as preventative treatment as it takes six months to find out if she is infected with HIV, Karten explained to CNN.